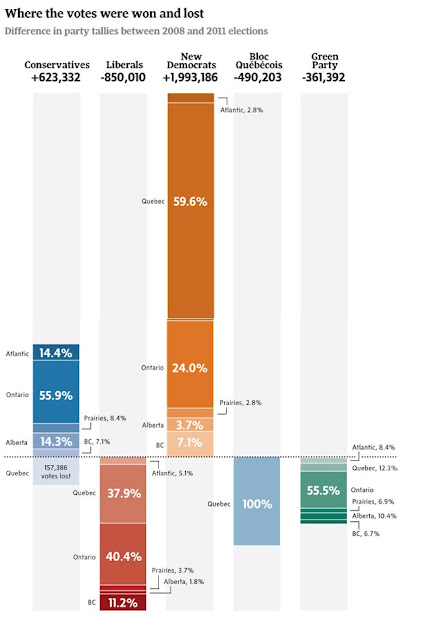 Who really benefited from vote splitting this election?

Ken Boessenkool and Brian Topp, a Con and an NDP strategist respectively, crunch up the numbers and conclude :

"The Conservatives and the NDP won their seats with, on average, large pluralities and considerable margins over the party that finished second – which was usually not the Liberals."

Even in Ontario and the Greater Toronto Area where the Libs claim they were hurt by vote splitting? Yup. Even there.

To be honest I've no idea whether Topp and Boessenkool's method for determining vote splitting - explained at the link above - is sound and I'm hoping Alice will find time to evaluate it, but I rather liked the dramatic graph accompanying it, showing how the party tallies shifted in each province compared to the 2008 election.

Alice has her own graphs here.


Paul Wells on vote splitting :
On the impertinence of the NDP

The Conservatives won 12 seats in the province in large part due to vote-splitting on the centre-left. Had the NDP surge fizzled on ballot day – and the votes cleaved to the Liberal camp – Stephen Harper’s majority would have been a bare-minimum 155.

Yes I know we're all bored with election post mortems by now.  But in 4½ years the Liberal strategic voting sites will once again be handing out bucket advice to 'vote Lib so the Cons won't get in' and I figure we're going to need this as a reminder.
.
Update : Thank you, Alice!
.
Posted by Alison at 12:57 am
Email ThisBlogThis!Share to TwitterShare to FacebookShare to Pinterest
Labels: Election 2011, vote splitting