Steve gets his long gun wedge on 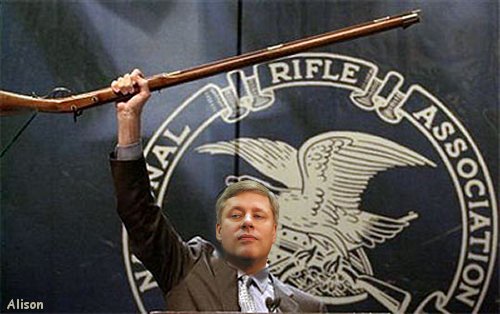 Never mind that rifles and shotguns are the weapon of choice for spousal homicides (71% in the last decade, of which the majority of victims are women), or that 14 of the last 18 officer shooting deaths were committed with a long gun, or that the long gun registry last year cost less than 40 Gazebos ($1Gazebo =$100K) and less than one one-hundredth of what just one of the Cons nine new war on invisible crime bills will cost next year ($4M vs $458M) .... the important thing for Steve is that the long gun registry is a nice wedge issue with which to divide the official opposition and a fuck you to the rest of us not happy about his party's NRA-Canada long gun registry connection.


"the bill removes the requirement to call and confirm transfers".
That means that a gun shop doesn't have to check if a buyer's licence is valid before he or she sells a weapon powerful enough to penetrate soft body armour.
As a consequence, criminals with fake firearms licenses and domestic abusers with a firearms licence card they shouldn't have can walk out of a gun shop with a shiny new gun, no questions asked.

And about those transfers :

Glen McGregor at the Ottawa Citizen, writes about the bill's clause mandating destruction of all records of registered long-guns.
Glen doesn't much care for the destruction of government data and has published, sans names and addresses of course, 7 million records from the 2007 gun registry database. Go, Glen!
.
Posted by Alison at 12:07 pm
Email ThisBlogThis!Share to TwitterShare to FacebookShare to Pinterest
Labels: Feminism, long-gun registry, NRA

the gun registry issue was on cbc almanac at noon today
there was little discussion, just 3 geezers pointing out how stupid it is and a waste of money and no need for it at all, with strong support from some SFU pro...
disappointing until near the end when a woman from Van, named Linda called in and formidably spoke out about a an action that is just serving a bunch of fat middle class men and she is mad as hell that all the efforts over the years plus money spent is going to be wiped out in one fell swoop, this is all about men and their guns, and is very undemocratic and sexist....after the call
the men respond with: well, women use kitchen knives as weapons and those
aren't registered