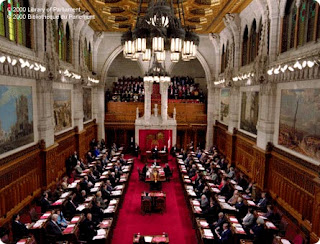 Harper-appointed Senator Nicole Eaton is calling for a private members bill to replace the beaver with the more "stately" polar bear as the national symbol of Canada.


In her remarks to the Senate, the former National Post gardening columnist from the Eaton department store family referred to the beaver as "a has-been", "a dentally defective rat", and "a big rat that doesn't reflect our new values".


Apparently overlooked in the flurry of CBC, G&M, CTV, National Post, and Vancouver Sun coverage of her remarks is the source of her enmity for beavers and the presumed reason why she feels Canada should agree to her request for "a national emblem makeover" :


"We have a cottage on Georgian Bay (in Ontario), and beavers eat away our dock every year. There are thousands of trees around, but no, they choose our dock," Eaton said.

Okey dokey then. Brought to you live from the Canadian chamber of sober second thought.
.
Posted by Alison at 11:00 am
Email ThisBlogThis!Share to TwitterShare to FacebookShare to Pinterest
Labels: Senate

Too bad she couldn't give some 'though' ahem, to the botulism from gobies and zebra mussels, the invasive species that are washing ashore thousands of dead birds and fish. Yep, even on tony Georgian Bay.

I like the National Post article. No mention whatsoever that it's a CPC Senator. I guess they're trying to imply that nonsense from Senator = Liebural Senator = Harper will save us by screwing around with the "useless" Senate.

She wants to make our national emblem a creature that's in imminent peril from global warming? Ouch. Irony's dead.

The waterbaby is restraining herself from commenting. Barely, apparently.
SO easy, SO tempting...