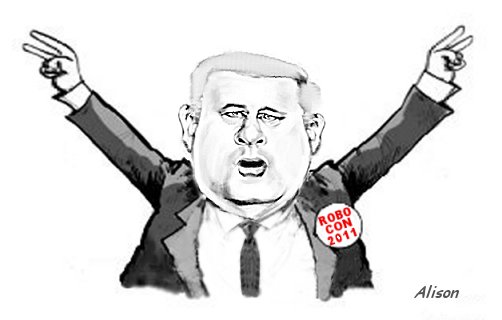 Dr. Dawg does Harper: I'm not a crook


Callers on behalf of the federal Conservative Party were instructed in the days before last year’s election to read scripts telling voters that Elections Canada had changed their voting locations, say telephone operators who worked for a Thunder Bay-based call centre

She says RCMP said there was "nothing they can do".
And although staffers calls to the public were monitored by a supervisor ...

"... workers shortened their script — although they weren’t supposed to — and said “... I’m calling from Elections Canada ...”

Earlier in the call centre campaign "if a person identified himself as Liberal or NDP, the agent punched a button to indicate he was not a Conservative supporter."

So. If only those Lib or NDP people were then singled out for call back on Election Day and misdirected to wrong or non-existent polling stations, that's flat out effing election fraud.

*Responsive Marketing Group : “We work exclusively with right-of-centre campaigns to develop fundraising and voter contact strategies that target your message to the right audience, maximize your vote-getting, and win.”

Notable that Harper's former deputy chief of staff Patrick Muttart was on loan to Steve's election war room at the time from his new position with a stateside Republican PR company. You can check out Muttart's new boss' record on election dirty tricks in the US here.

And a reminder : Steve's majority holds by just 14 12 seats.
(Thanks, Dr. Dawg! for the correction : 12 seats, not 14.)
So far, six of those ridings are reporting dirty tricks on Election Day as of this morning.

Vancouver Sun : Judicial inquiry needed into election scandal
Yup.
.
A few more links, because so far none of us has covered everything in one place :
Dave : Things to energize your outrage
Boris : What made you do it?
Dammit Janet! : Bad times, good times
Montreal Simon : The Bright Side of the Robo Con Scandal - with great toon
Also LeDaro's clever vid : Robocalls
.
Posted by Alison at 6:48 am
Email ThisBlogThis!Share to TwitterShare to FacebookShare to Pinterest
Labels: Con fuckwittery, Election 2011, election fraud

Annette Desgagné should be considered a hero for speaking out about this. It is wrong to screw with elections.

To make even that thin gruel meaningless is intolerable.

My entire body is aflame with anger and indignation. The latest dump, that of dollars paid to RMG, includes my riding, Palliser. I would dearly love a do-over here!

Responsive Marketing Group or RMG was hired by 95 conservative candidates across the country in the last election at over a million dollars.

Any relationship between them and Muttart's group Mercury?

And keep an eye out for other possible Conservative companies. Remember Go Newclear Productions is connected to "Ethical Oil" and to various Conservatives; though I don't know if they have anything to do with the electoral stuff.

Star: Earlier in the call centre campaign "if a person identified himself as Liberal or NDP, the agent punched a button to indicate he was not a Conservative supporter."

NatPost: “We would call these (voters) and they would say ‘we went there and that’s not a real place,’” said a woman, who worked for Responsive Marketing Group Inc. as a call operator, and asked not to be named.
“The whole call centre (noticed it was happening).”

These calls would have only been made to identified Conservative supporters, said the party’s spokesman Fred Delorey, in an email."

Yeah, sure thing, Fred, that makes sense.
Ok so who wrote the various scripts the call centre workers were given to read from?

Good grief, Holly--there's a dot worth connecting! Marc...Lemire. Where *have* I heard that name before?

Electoral fraud. Such a nice soft euphemism. Attacking the foundations of our democracy has another name, and we might as well start using it.

Yes, Dr. Dawg, my eye just happened to land there, on that name I've read pretty often. I have to wonder what "Creative Services" Marc Lemire whas to offer.

Alison: OT, but mail to you has started to bounce.

Thanks, Dawg. Back now!

Thanks for all my new homework assignments, guys - I'll get right on it ;-)

And yes, go ahead and repost Milhous Steve anywhere you like!

I like your blog. I have added it to my blog list. Love the cartoon of Stevie.