Steve flexes his sino-pecs from China 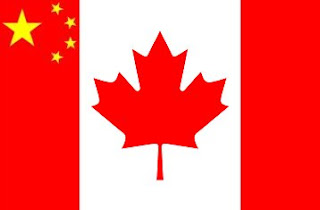 
"Canada does not — and cannot — disconnect our trading relationship from fundamental national values."


A Chinese state-owned corporation wants the Supreme Court of Canada to overturn an Alberta court judgement ruling that would force it to stand trial in the deaths of two oilsands workers and 53 safety charges.

In the Great Hall of the People, Harper told Premier Wen Jiabao that Canada and China enjoy “a strategic partnership based on respect and admiration.” Wen answered that Harper’s visits “opened a new page in our bilateral relationship,” which translated into English means, “We’re glad you finally got with the program.”

Then Harper said he would be raising human rights and consular issues. That’s when the journalists were ushered out of the room. It felt just like Ottawa.

Ha! I'm not lost, I'm not confused, not yet. But wait...Where's Mr. Wang Yang, he's been disappeared? Mr. Wang wrote -
“When everyone sees this letter, I’ll either be dead or have lost my freedom,” reads the letter, dated three days before Mr. Wang entered the U.S. consulate. Wang is Mr. Bo's right hand man, Mr. Bo and Mr. Harper have a meeting on Saturday. Will that meeting still happen, will Mr. Harper ask Mr. Bo if Mr. Wang's human rights are being upheld? Like Berlyn said - Fuck.

"sino-pecs" - you really slay me, Alison.

But you forgot to mention the Pandas! That's got to count for something ;-)

Toe : I read that too but I don't see it getting any coverage here, do you?

BY : What to name those cute little fellahs, huh?
How about Tar and Sandra?
I was going to put them on the flag but had to dash off to work before I could finish. What I really wanted to do was put Sinopec's logo in the place of the red leaf but somehow we've contrived to have that be illegal in this country.