Evan Solomon asks why restaurants don't just raise wages to attract workers : "Guess what? This is the criticism - raise the wages and they will come."

Jerry Lundegaard Garth Whyte of Restaurants Canada : "So let's raise it to $100 an hour - we'll still need them [temporary foreign workers]. That's the issue, we have, uh, you know, people, we're, this is well above the average wage, we're putting it well above ... "        [h/t Press Progress for above vid]

Ok, let's look at that. This is Slide #20 in a 2012 powerpoint presentation given by Ron Reaman, VP, Ontario, of Restaurants Canada, formerly known as CRFA [Canadian Restaurant and Foodservices Association],  bragging about their lobbying success in freezing the minimum wage in 2011 :
hi-liting mine 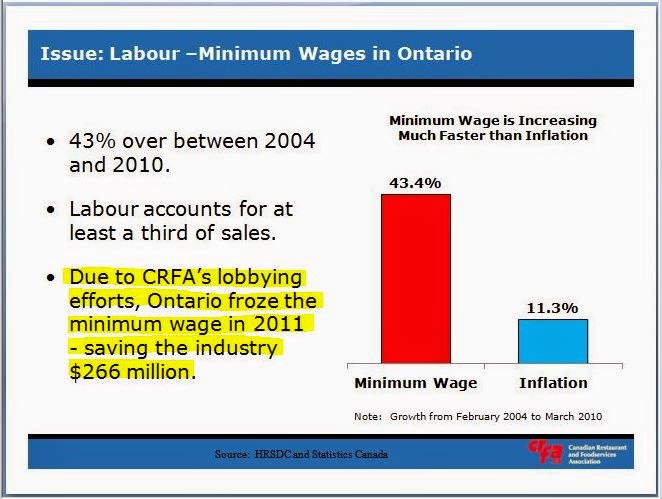 And here's slide #21 - a survey of Restaurants Canada's members : 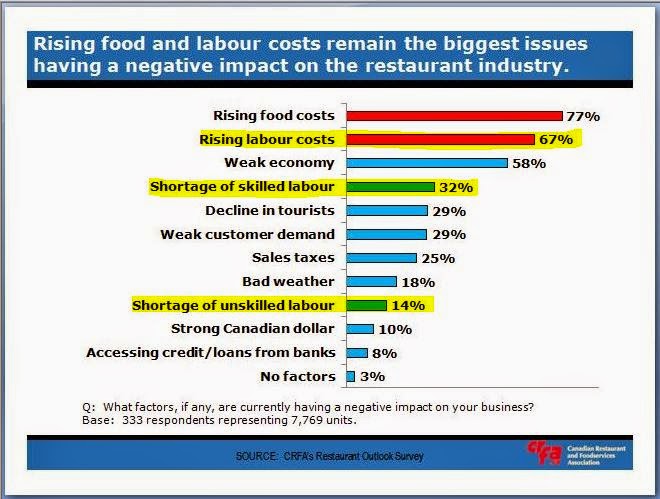 Q: What factors, if any, are currently having a negative impact on your business?


Both slides rather put the boots to Garth Whyte's plaint at top that importing temporary foreign workers is not about wages, and by extension, keeping them down for everyone else.

Back in November 2007, Mr Reaman and Joyce Reynolds of CRFA appeared before the Standing Committee on Industry, Science and Technology to complain about labour shortages. Ms Reynolds suggested "a bridge from temporary to permanent residency" for temporary foreign workers and that they be allowed to apply for it from within the country.

She then thanked the Conservative government through the Chair for streamlining the LMO process and raising the number of years TFWs could remain in the country from one to two years. She asked that it be increased once more to four years. And lo - in 2011, it was.

More on Restaurants Canada and its US lobby counterpart.
.
Posted by Alison at 6:07 am
Email ThisBlogThis!Share to TwitterShare to FacebookShare to Pinterest
Labels: lobbying, Restaurants Canada, separation of corporation and state, temporary foreign workers, workers rights

I do wish they'd do away with the term "labour costs" and replace it with "costs of living for the people who rely on me for their livelihood." But then that might make them feel a little awkward about their slavery preference.

Boris : At that same 2007 committee meeting, Peggy Nash asked Reynolds what % of food workers were under 24 years.

Reynolds : "75% of those who are earning close to minimum wage are students. They're working part time. They are not full-time positions where they're trying to support a family. These people are often from high-income households ..."

Many of us did "unskilled" work in our younger days with the expectation that it was good to have a work history and that our education was preparation for something better paid, and certainly more rewarding. Often, there was actually considerable skill to be developed in the course of a summer or part-time job, but the assumption was pretty much always that our part of the work force would be moving on. This worked at the time because there were always new opportunities opening up farther up the employment food chain. This is no longer the case, what with the offshoring of almost all of our manufacturing, stop-and-start economy in the construction industry and the devaluing of much of the professions. Automation has also made inroads into the opportunities afforded those wishing to work. The benefits of our modern economy, it is now pretty universally acknowledged, accrue mostly to the capital owners while the bulk of the population is left to fight over the crumbs. Concerted community action is needed to redress the plundering of the most recent period of capital expansion, and the effort needs to be world-wide so that foreign workers will want to stay home and make their living while they build their lives.

Perhaps the most depressing thing about this Alison is that the CFRA is so disingenuous!! Like the free traders, they wish to assure Canadians that they really have our interests at heart. As you have previously shown, they are an industry lobby with ties to the US organization (formally run by infamous Republican presidential candidate, Herman Cain), the National Restaurant Association. Are they interested in suppressing wages? Would they like to see the minimum wage lowered? Do they care about Canadian wages? Kenny has been caught out by this group and I think he is hoping the issue will blow over. I hope your posts (and others!!) will help Canadians see what a crop of BS they are trying to serve for lunch!!

Jesus, he is exactly Jerry Lundegaard - "I answered your question! I answered the darned... I'm cooperatin' here! So there's no need to... we're doin' all we can here!"

"Concerted community action is needed to redress the plundering of the most recent period of capital expansion, and the effort needs to be world-wide so that foreign workers will want to stay home and make their living while they build their lives."

You mean like writing letters and attending and speaking up at community events and talking to like minded people and forming support groups don't you?

Certain to effect massive change. Fast too I bet.

I wonder about small businesses. A few years ago someone I know was trying to get a raise from $10/hr to something liveable given his responsibilities. Owner/boss said that was difficult. One day my friend saw the books and found that the owner was taking well over $150K a year in salary whilst his handful of employees could barely get by. Any increase in their wages would mean a decrease in his, so at that scale when they say "negative impact on my business" they might really mean "negative impact on my personal income" and not the business.

You still didn't address the issue of how to sell the $5 cups of coffee and $10 burgers which would follow from artificially reducing profitability...which is what higher wage costs would do.

I will eat at the next restaurant that withdraws its membership from Restaurants Canada and pays workers a living wage, like this restaurant is doing.
http://globalnews.ca/news/1325943/b-c-restaurant-plans-to-ax-tips-pay-employees-a-living-wage/

I have no idea if this guy is a member, but he's on the right track.

When are you going to run for Prime-Minister?

I will vote for you as I believe you would make Canada better for Canadians.

When you call it you are right on.

I love you lady for speaking your piece, it resonates with allot of us.

Thank you for your online presence.

I would wash greasy pots and pans for $100 per hour, I job I did for awhile in my younger days for a lot less.

Perhaps we will be enjoying a respite from Kreditanstalt soon, if he can't afford Tim Horton's already, he may starve to death or at least be too emaciated and weak to push his putrid reich wing crap evertwhere he goes.

By the Way, Mr. K......do you get out much, in my town a hamburger already costs $10 or more, and those serving it and cooking it still get paid minimum wage....that's at a hotel restaurant and pub, not a fast faux food joint.

So in order for those cooking and serving our food to make a living wage, maybe a hamburger should be $50 or $100! Or maybe only CEO's and Christy Clark's friends should get to eat out, as no one else will be able to afford it!

What I don't get is - Alison busted these guys as minimum wage suppressing lobbyists two weeks ago now and I've seen that info linked to in comments under CBC articles about tfws, yet CBC and other print media continue to interview them as if they are credible experts. How does that work?

"yet CBC and other print media continue to interview them as if they are credible experts. How does that work"

John McCain spent the Vietnam War in a cage after being shot down committing a war crime and since then he has been wrong on pretty well everything, Sarah Palin, Iran, Iraq, Libya and aside from the plane he was shot down in during the war crime, he destroyed four or five other naval fighters, not even in real action.....on leave or colliding with them on deck of a carrier. Yet every Sunday there he is the supposedly Mavericky expert on everything - go figger!

Dubya was/is an idjit too, but at least now that he doesn't have Deadly Dickhead to stick his hand up him and run him, he mostly stays out of sight and keeps his mouth shut. Maybe McPain should take lessons?