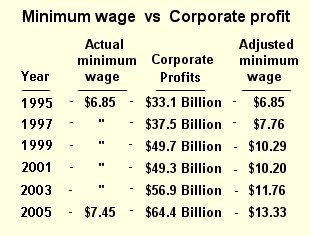 In the midst of the recent debate over whether the NDP proposal to increase the Ontario minimum wage by $2 to $10/hr would cause the economic sky to fall, Accidental Deliberations produced this great chart to show just how far behind corporate profits the minimum wage has actually fallen. The "Adjusted Minimum Wage" column shows where the min wage should be. Alas, while profits have almost doubled in the last decade, the minimum wage has increased a whole 60 cents.

So how much of an increase did Ontario's lowest paid workers get?
Ontario Labour Minister Steve Peters announced a 25 cent increase, bringing the minimum wage to $8/hr.

"It is to Ontario's economic advantage to see that our workers are paid a fair wage," said Peters, who also voted on Dec 12 to increase Ontario's MPPs salaries by a whopping 25%.

Rambling Socialist covers NDP House leader Peter Kormos' ejection from the Ontario legislature for pointing out this hypocracy on the part of the Libs and Cons, who put aside party differences just long enough to pass it 78 to 4.

UPDATE : The Toronto Star gets it.

Posted by Alison at 3:49 am
Email ThisBlogThis!Share to TwitterShare to FacebookShare to Pinterest

Well that sums things up nicely for people who can't put 2 and 2 together to get 4.

25 cents! An extra $10 a week won't exactly change a person's life.
They should be embarrassed to discuss anything other than at least $2 an hour.
It seems practical to make people more solvent and it should be a win win for the economy.

If there is one thing all politicians everywhere can always agree on, it is that they just are not paid enough. This is true of every workplace in every city in every nation of the world -- the difference is that the people in your office or mine can't just vote themselves a raise when they feel like it.