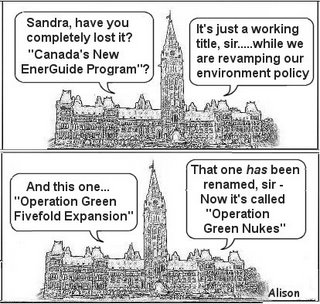 Why "Operation Green Nukes"?
Well we've all already read about this :

U.S. urges "fivefold expansion" in Alberta oilsands production
"The U.S. wants Canada to dramatically expand its oil exports from the Alberta oilsands, a move that could have major implications on the environment.

U.S.and Canadian oil executives and government officials met for a two-day oil summit in Houston in January 2006 and made plans for a "fivefold expansion" in oilsands production in a relatively "short time span.

Canada is already the top exporter of oil to the American market, exporting the equivalent of one million barrels a day — the exact amount that the oilsands industry in Alberta currently produces."

Which reminded us of this :
"But the current extraction of oil from the tarsands results in the spewing of millions of tonnes of greenhouse gases into the atmosphere: it's already the biggest source of new greenhouse gas emissions in Canada."

But it's cool because Steve is on it :
" "Canada's natural resources will be developed but that will not be done at the expense of the environment," Dmitri Soudas [PM's office] told the Canadian Press.
Canada's main oil lobby group said there is no pledge to increase production five-fold for the Americans.
"There is no promise," said Greg Stringham of the Canadian Association of Petroleum Producers."

OK. So why then did Natural Resources Minister Gary Lunn stand beside federal Environment Minister John Baird yesterday and say this? :
"As we see the potential increase in (oilsands) production, moving from a million barrels a day up to four or five (million), we need to do better. I think there's great promise in the oilsands for nuclear energy," Lunn said.
"There's a great opportunity to pursue nuclear energy -- something that I'm very keen on."

Why so very keen, Gary? Well, perhaps because of this :

"Paul Michael Weaby, a Washington insider and an expert on the geo-strategic aspect of the oil industry, said Bush is counting on Canada to help wean the United States off Middle Eastern oil — a goal now defined as a national security objective.
"He wanted to have a reduction of 1.5 million barrels a day by 2015 from the Middle East. Although he did not mention Canada, that is in fact where the replacement supply will come from."

The Alberta oilsands as a U.S. national security objective.
Surprised? No. Me neither.
Think if Canada doesn't grow some nukes and produce those 5 million barrels a day, that we will be treated any better than Venezuela, that other old western U.S. oil supplier?
No. Me neither.
Posted by Alison at 2:28 am
Email ThisBlogThis!Share to TwitterShare to FacebookShare to Pinterest

I believe Mr Lunn also said recently that it is not a matter of 'if' but 'when'.

And, oh ya, this approach was done once before as a test case in Colorado with some case, at least in terms of the liberation of the fossil fuel in question.

There was only one problem - the fuel was so laden with radioactity that it was rendered completely unusable.