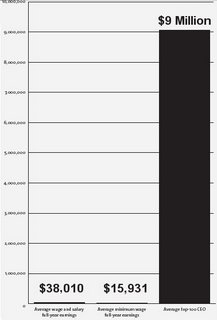 asks the Canadian Centre for Policy Alternatives.
Ten points if you can find the average Canadian annual salary on this chart.
100 points for finding the minimum wage worker.

The third bar represents the average annual earnings of Canada's top 100 CEOs, ranging from $2.8 million at #100 to $74.8 million at #1.
By the time you read this, the average top CEO in Canada will have made twice what the average Canadian will make in the whole year - at $4500 per hour.

The most frequently made objection to raising wages is that it prohibits industry competitiveness.
Really?
Are these guys really worth the entire yearly salaries of a whole town?
After all, it's not like that money is going into Research and Development, is it?
Meanwhile one in six children in Canada live in poverty.
Electoral democracy is very nice but it doesn't mean squat without some improvements in our economic democracy.
Posted by Alison at 6:33 pm
Email ThisBlogThis!Share to TwitterShare to FacebookShare to Pinterest
Labels: Economy