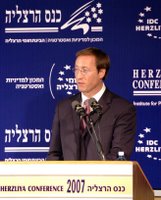 Peter MacKay, addressing the Herzliya Conference in Israel on Monday on the subject of Israel's national security :
A short intro : "It's a great privilege for me yada, yada, yada..."
and then he gets right to it :
"I will explain a little about Canada’s new government. We are sure that Israel’s vision we will clear. We are giving Canada’s police and military the resources they need to get the job done. We are improving the effectiveness of our international assistance and are bringing new force to our diplomatic effort abroad..."

Good lord. And here I thought they only talked that way to us.
Pete continues :

"Sharing prosperity is an important value for Canada. This is not a uniquely Canadian value, nor is it a uniquely western value. They belong to anyone who wants access to them. Freedom and democracy give people hope."

However, that said, at a conference that saw :

Newt Gingrich say "The Israeli people are facing the threat of a nuclear Holocaust...Our enemies are fully as determined as Nazi Germany, and more determined that the Soviets...the United States could lose two or three cities to nuclear weapons, or more than a million to biological weapons."

Pete definitely deserves some kudos for this :
"There are simple, practical measures Israel can make: take away the arbitrariness at border crossings, treat average Palestinians with respect and dignity, issue work permits.
Israel’s security depends on the Palestinians’ ability to prosper in dignity. The increasing growth of settlements and settlement building in the West Bank is also a hindrance to this process."

Yeah, I know he started out like the Pete of Green Gables but he got there. Good on ya, Pete.
Posted by Alison at 5:38 am
Email ThisBlogThis!Share to TwitterShare to FacebookShare to Pinterest

"We are sure that Israel's vision we will clear"???

and of course it's all just a carry-on from the glibs ....after all, it was the rcmp in jordan training the iraquis to become police (so they could be blown apart in two minutes), and we had a couple of ships in the gulf from the get-go....but no one wants to talk about that.

let's talk physiology and evolution. men have two orifices with which to urinate, deficate and reproduce. women have three, which puts them a couple of million years ahead on the evolutionary scale.

this makes me wonder about rona ambrose, ann coulter, and the 'real women' of the world. has anyone ever done a check 'down there' on war mongering, enviornmental destroying gals?

pete, pete, pete, you are as brainwashed as the best of them....now wash your mouth out with soap.

"this makes me wonder about rona ambrose, ann coulter, and the 'real women' of the world. has anyone ever done a check 'down there' on war mongering, enviornmental destroying gals?"

Must be why they all deficate out their mouths.

What did he mean by this: We are sure that Israel’s vision we will clear.

I hope he is not saying that should Israel go ahead and bomb Iran, that Canada would support (clear?) such a move!!! If so, does he have any idea what he's dealing with?

A puzzling phrase from MacKay, isn't it?
If you click the Herzliya link, you will see MacKay's speech is reported as a "summary", so we do not know if those are his exact words or an awkward translation or even a guess at a misheard part.
As it is the conference's official version of his remarks, I haven't been able to find an alternative one.

Thanks for the Raw Story link and timeline.
I would add that having achieved its initial objectives, PNAC has since closed its offices.
Presumably this will save its members the bother of commuting between the old offices and those of the American Enterprise Institute two floors above in the same building.

Given the sentences he said right before and after, MacKay's peculiar phrasing only seems to refer to clearing up possible Israeli misconceptions about Canada in particular.

We still don't really know where Harper and MacKay will fit in with US plans for Iran. Personally I doubt they're even players.