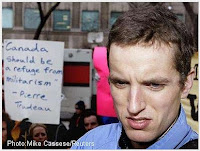 More US veterans have committed suicide than have died in Iraq.

I'm writing this for all you fuckwits out there chiming in to comments at CBC that Jeremy Hinzman and Brandon Hughey are cowards, that they shouldn't have signed up if they didn't want to fight, that people can't change their minds, that if they were willing to go to Afghanistan they should be willing to go to Iraq, that as war deserters they deserves to be sent back to face courts martial and jail in the US.

Hinzman enlisted in 2001 at age 22. A year later he and his wife had become Quakers. After his application for conscientious objector status was denied, he served his tour of duty as an armourer in Afghanistan. It was not till his unit was to be redeployed to Iraq that he deserted to Canada in 2004 with his wife and child.

Hinzman in 2004 : "The war on Iraq is immoral and illegal. If you are ever going to wreak havoc on a country, it would need to be justified. Every justification or rationale that we have ever offered for going to Iraq has been bogus. There were no weapons of mass destruction there. There have been no links established between Saddam and international terrorists, and then the notion that we're going to bring democracy to Iraq is -- we'll see if that comes to fruition, but I don't think we'll see it, unless it's convenient to America's agenda."

So he did his duty in Afghanistan but couldn't stomach Iraq.
How exactly does this differ from Canada's official position on Iraq?

Nonetheless the very reasons that caused Hinzman to desert are the same ones that he is not allowed to use in his application to the Immigration Board of Canada.
Hinzman on his Immigration hearing : "They raised the issue that they felt that the legality of the war in Iraq was irrelevant to our refugee claims. So, we were unable to argue that in any way."

But because he originally volunteered and did complete his tour in Afghanistan, he is not considered to be a conscientious objector so he isn't eligible for refugee status. Amnesty International disagrees.

Last week, after losing two immigration hearings and one from the Federal Court, the Supreme Court of Canada declined to hear their case. Their only hope now is a parliamentary intervention, one which would be certain to piss off the US. Does the Security and Prosperity Pact even allow Canada to accept war resistors now?

That protest sign behind Hinzman reads : "Canada should be a refuge from militarism - Pierre Trudeau".

Well? Are we? Or are we so thoroughly enmeshed in the illegal US war on terra that we are the cowards now?

War Resisters Support Campaign.
As usual there are some MPs email addresses there for you to write to.
Posted by Alison at 11:49 pm
Email ThisBlogThis!Share to TwitterShare to FacebookShare to Pinterest
Labels: Afghanistan, Iraq, war resisters

Does the Security and Prosperity Pact even allow Canada to accept war resistors now?

Shades of things to come, Alison.

That logic -- they joined voluntarily; if they were willing to go to Afghanistan, they should follow orders into Iraq -- that is Nazi logic. How far have we regressed that people should have forgotten that, fail to grasp the principle?

And yes: it would be nice to know what sort of "administrative" rearrangements now prevent Canada from acting independently on any turf whatsoever.