Today is Buy Nothing Day - Give it a rest! 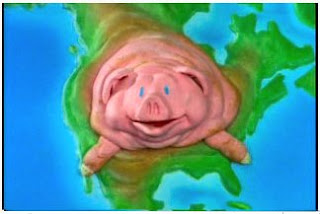 The average North American horks down 5x more than a Mexican, 10x more than a Chinese person, and 30x more than a person from India. So says the Adbuster ad that I snagged the above image from and which MTV has declined to air again this year, presumably due to irreconcilable ideological differences - la, la, la, lol, lol, lol.

My favourite culture jammer action for Buy Nothing Day : 10 people silently drive their shopping carts around and around a store or mall in a long, inexplicable zombie conga line without ever actually buying anything.
I don't know why but that one utterly cracks me up.
*braaaaaiiiinnns....braaaaiiinnns*
Posted by Alison at 11:19 am
Email ThisBlogThis!Share to TwitterShare to FacebookShare to Pinterest
Labels: Adbusters, Buy Nothing Day