Help Abdelrazik get a ticket home 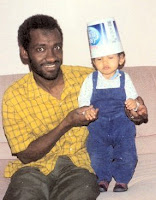 Following yesterday's post on the plight of Abousfian Abdelrazik and the new catch-22 conditions our government has seen fit to impose on his return to Canada, Sumeet Jain, a member of BASAS, left the following comment.
.
[BASAS, the British Association of South Asian Studies, is, according to their website,"the largest UK academic association for the study of India, Pakistan, Bangladesh, Sri Lanka, Nepal, Bhutan, Maldives and the South Asian Diaspora."]
.
Mr Jain's request :

"See the facebook group I have set up to support Abousifian. http://www.facebook.com/group.php?gid=69034411293
I am asking everyone to send him a token donation to get a ticket home and to protest the Canadian government’s stand that anyone who supports him is a supporter of terrorism."

Quite right. Both Sudan and the RCMP have already cleared Abdelrazik of suspicion :

"The RCMP conducted a review of its files and was unable to locate any current and substantive information that indicates Mr. Abdelrazik is involved in criminal activity,"wrote Mike McDonell, the force's assistance commissioner for national security criminal investigations, in a Nov. 15, 2007, letter that formed the basis for the government's request that Mr. Abdelrazik be taken off the UN blacklist.
However, that request was blocked by at least one member of the UN Security Council – presumed to be the United States."

It is appalling that this has been allowed to drag on for more than five years, leaving Abdelrazik destitute and living in the Canadian embassy in Khartoum. If he is guilty of anything other than being on a no-fly list, bring him home and charge him.
Mr. Jain's facebook link above. Go.
.
Update : Dr. Dawg's letter to Mr. Abdelrazik.
.
Posted by Alison at 12:10 pm
Email ThisBlogThis!Share to TwitterShare to FacebookShare to Pinterest
Labels: Abdelrazik, Catch 22, extraordinary rendition, no-fly list, sucking up to the US, UN black list