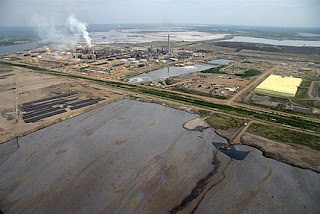 Nearly ten months after 500 migrating ducks died in the toxic waste of a Syncrude tailings pond in the tar sands, the governments of Canada and Alberta have charged the company with breaking two environmental laws. Their sudden interest was apparently prompted by a private lawsuit launched last month.
The maximum combined penalty that can be levied against Syncrude under those laws is $800,000.
The G&M reports that this amount "represents less than one hour of production revenue from the mine".
.
Posted by Alison at 1:11 am
Email ThisBlogThis!Share to TwitterShare to FacebookShare to Pinterest
Labels: 500 dead ducks, Environment, Syncrude, tarsands, toxic waste