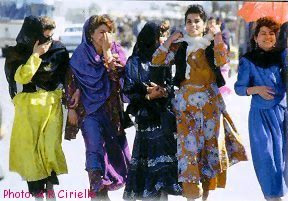 Photo : Women university students in Kabul, 1995
Then : Prior to the CIA-backed civil war in Afghanistan and the Taliban rule beginning in 1996, 50% of the students and 60% of the teachers at Kabul University were women, and 70% of school teachers, 50% of civilian government workers, and 40% of doctors in Kabul were women.

Now : "While the Bush administration boasts that millions of Afghan girls are now going to schools, what US media outlets won't tell you is that schools are still scarce in rural areas, and most schools that do function teach a curriculum limited to Islamic studies, similar to boys' schools during the Taliban era." ~Afghan Women's Mission

A couple of nights ago I watched Afghanistan expert Rory Stewart, the British diplomat to Iraq who walked across Afghanistan immediately following its invasion by the US, on tv on CPAC. He painted a pretty bleak picture.

No link but I took notes. Here is the stat that blew me away :

85% of aid money to Afghanistan goes straight to overhead and profits for private foreign contractors.

Now that the fantasy of turning Afghanistan into a "shining, white city on the hill" has been shattered, he said, the international community would be better off focusing on the few things it does well and then getting the hell out. More troops just reinforces the Afghan sense of being occupied which only adds to Taliban numbers.

"What about women's rights", asked someone from the floor.
"This is what I meant by unrealistic expectations" he answered, warning that Afghanistan is not going to conform to western standards or return to pre-Taliban conditions any time soon - not women's rights, not democratic rights. Such unrealistic targets only lead to disillusionment and more troops, a longer stay.

Nonetheless he does support long term economic aid to projects with practical economic results - roads, electricity, hospitals, schools - and singled out CIDA as providing some of the better examples of reconstruction projects that work.
Stewart's own NGO to hire local Afghans to produce and market traditional handmade goods, Turquoise Mountain, is a CIDA beneficiary.
.
Posted by Alison at 8:47 am
Email ThisBlogThis!Share to TwitterShare to FacebookShare to Pinterest
Labels: Afghanistan, CIDA, Feminism, media bias, Obama, Rory Stewart, war is a racket

He'd say that about Mr. Stewart as well. Tell him to go to the library.

That's because he doesn't appear to have anything sane to say on the matter.

Thwap : Gotta love those Torchies. There's nothing quite like quoting Kipling - Kipling!!! - to get across the point that sacrificing Canadian soldiers and Afghan civilians in US colonial adventures in order to keep the Canada/US border open for business is a great moral good.