National Geographic does the tar sands 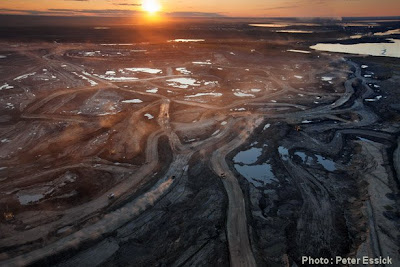 
"Here Syncrude, Canada's largest oil producer, digs bitumen-laced sand from the ground with electric shovels five stories high, then washes the bitumen off the sand with hot water and sometimes caustic soda. Next to the mine, flames flare from the stacks of an "upgrader," which cracks the tarry bitumen and converts it into Syncrude Sweet Blend, a synthetic crude that travels down a pipeline to refineries in Edmon­ton, Alberta; Ontario, and the United States. Mildred Lake, meanwhile, is now dwarfed by its neighbor, the Mildred Lake Settling Basin, a four-square-mile lake of toxic mine tailings. The sand dike that contains it is by volume one of the largest dams in the world.

To extract each barrel of oil from a surface mine, the industry must first cut down the forest, then remove an average of two tons of peat and dirt that lie above the oil sands layer, then two tons of the sand itself. It must heat several barrels of water to strip the bitumen from the sand and upgrade it, and afterward it discharges contaminated water into tailings ponds like the one near Mildred Lake.

The oil sands cover an area the size of North Carolina, and the provincial government has already leased around half that, including all 1,356 square miles that are minable. It has yet to turn down an application to develop one of those leases, on environmental or any other grounds."


.
Posted by Alison at 5:32 am
Email ThisBlogThis!Share to TwitterShare to FacebookShare to Pinterest
Labels: oil bidness, tarsands

Hands up everyone who would like to see the tarsands mentioned in O Canada.

Did anyone catch the company exec on the Current, CBC interview say that as a wilderness area its not up to much, so what the heck,hey?