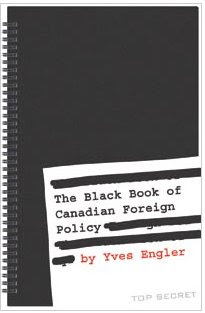 The Black Book of Canadian Foreign Policy
by Yves Engler , Fernwood Publishing
A 2007 poll that Engler cites found "84% of Canadians believed Canada played a positive role on the world stage while 10 percent felt it was negative."
Being peacekeepers is a big part of the Canadian national identity.
We are at pains to differentiate ourselves from US corporate colonialism and we are pissed with Steve for his Cold War era mongering and his nonsense about "putting Canada back on the world stage." We never left, we say.
.
In his new book to be launched May 3, Engler asks us to take another look at that mythology of Canadian foreign policy in dozens of countries in South America, the Middle East, Caribbean, Africa, and Palestine.
.
Via The Dominion, a book review at Canuck Media Monitor.
The entry on Colombia [as the Cons shepherd the Canada-Colombia Free Trade bill through the House] :

"Colombia Canada's closest ally in Latin America is the country that has consistently had the worst human right record in the Western Hemisphere.

In 1997, Ottawa initiated a re-write of Colombia's mining code.
CIDA worked on it with a Colombian law firm and the Canadian Energy Research Institute (CERI). The proposals became law in 2001 and offered a familiar list of goodies to mining corporations: the weakening of environmental and labor laws, reduced royalties paid to the government, tax exemptions, and added years to mining concessions.

In the resource sector, the link between profiteering and massive human rights abuses, especially forced displacement, is very obvious. Colombia's population of internally displaced persons (3 million as of 2008) is second only to that of Sudan. Engler described how two Canadian companies, BFC Construction and Agra-Monenco, contributed to human rights violations in northeastern Colombia:

"With $18.2 million from EDC [Export Development Canada] the companies' Urra dam submerged over 7,400 hectares, including old-growth forest as well as the
lands and homes of 411 families, all of whom were without individual legal land titles, only having collective indigenous land rights. About 2,800 people were forcibly resettled to make way for the Canadian companies' project and a further 70,000 people were directly impacted. Predictably the community resisted the dam. According to Amnesty International, six indigenous people protesting the project were killed and ten additional members of the community were disappeared by paramilitary and guerrilla forces."

Chile? We sided with the US to cut off IMF funds to Salvador Allende but after the 1973 coup, endorsed sending Pinochet $95 million of IMF funds. By 1978 direct investments by Canadian companies in Chile totaled $1 billion.
Iran? We tried to sell them nuclear power.
Iraq? Them too.
Colombia we can still do something about. Go.
.
Posted by Alison at 3:22 pm
Email ThisBlogThis!Share to TwitterShare to FacebookShare to Pinterest
Labels: Canada-Colombia Free Trade Agreement, Canada's foreign policy, Chile, CIDA, Colombia, human rights, Iran, Iraq