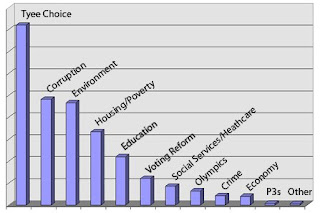 The Tyee has been running a fundraiser since Monday to hire an extra reporter to cover election issues. The donation form includes the question "Which election issue matters most?" , allowing contributors to directly fund reporting on the issues most important to them. Now closing in on $9000, the graph represents the per dollar interest in each category.
Not bad for an alternative online paper with the originally modest goal of raising $5,000 by April 14th!

Well done, Tyee. Gord knows we need a stronger alternative to the Gordo shmooze-fest foisted on us each election by the two CanWest dailies - the Sun and the Province - and Tyee coverage of local issues is always excellent. The categories Corruption and Environment are leading so far, highlighting reader interest in the investigation into the sale of BC Rail and the campaign to Save Our Rivers from Gordo's privatization of hydro power.

That said, I'd much rather see a greater focus - with a graph to match - on each category ranking per voter rather than the per dollar they are using as illustrated above. Tyee publisher David Beers has promised to produce one after Chrystal Ocean of Challenging the Commonplace brought it to his attention in Tyee comments.

So go send them a few bucks and help the Tyee reframe the conversation before the May 12th election. My money's on Voting Reform.
.
Posted by Alison at 11:55 pm
Email ThisBlogThis!Share to TwitterShare to FacebookShare to Pinterest
Labels: BC election, Tyee