Take it to Iggy tomorrow at Canada Place 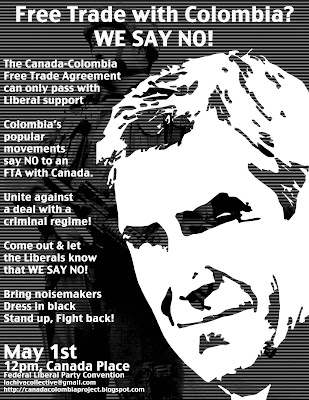 "We the undersigned are deeply concerned that Canada would abandon its values and its support of internationally recognized human rights in order to gain economic advantage for its companies at the expense of millions of displaced, impoverished Colombians."

Appearing before the International Trade Committee on March 26 of this year, Colombia Senator Robeldo was absolutely scathing re the Canada-Colombia FTA :

~Approval of the CanCol FTA will effectively "absolve, pardon, and reward" Uribe for his support of human rights abuses.
~It will condemn Colombia to poverty and result in even lower labour standards than they already have in order to compete with influx of subsidized Canadian foodstuffs. Local farmers will not be able to compete and will lose their land.
~Another 49 assassinations last year. More paramilitary orgs now, not fewer.

Canada steps into the void ...
Bowling for Colombians
How much for the little girl?
A licence to kill
.
Update : A couple of hundred of us I would guess at the rally on Friday. Many good speakers including NDP trade critic Peter Julian who has been a very effective critic of this FTA on the trade committee.
Dr. Dawg was inside the convention. Hi Dr. Dawg!
.
Posted by Alison at 4:47 pm
Email ThisBlogThis!Share to TwitterShare to FacebookShare to Pinterest
Labels: Canada-Colombia Free Trade Agreement, Colombia, International trade Committee, Uribe