Why the rush to PowerUp? 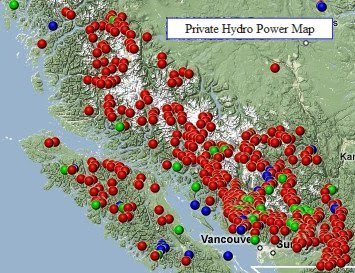 A map of proposed and existing run-of-river licences via IPP Watch:
Blue - generating; green - granted; red - application
Large Google map of sites here.
I wonder what the salmon think of it?

So given that we generally generate more power than we need in BC, what are all these for again?
Oh yeah - exporting power to the US :

"A key adviser to California Gov. Arnold Schwarzenegger said yesterday that B.C. run-of-river power may yet qualify as green power.
Utilities in California are nearly all struggling to meet a requirement that 20% of their electricity come from renewable sources by 2010.
They have only months to meet the target or face financial penalties, and private-sector power producers in B.C., along with the provincial government, are urging California to expand its definition of renewable power to encompass run-of-river projects with up to 50 megawatts of capacity as part of the solution."

Which is interesting because projects of less than 50 megawatts do not require environmental reviews.

Over at Plutonic Power, home of the $4-billion Bute Inlet run-of-17-rivers Project in partnership with US General Electric, environmentalist and executive director of PowerUp Canada "citizens initiative" Tzeporah Berman gave us another reason :

"We're in a recession and calling for a moratorium of the private sector of renewable energy companies would send the signal to the business community that this is not a place for them to invest in."

Certainly Gordo is invested in IPPs. In response to Squamish’s strenuous objections to a run-of-river development on Ashlu River, Gordo passed Bill 30, retroactively removing the right of local municipalities to stop such developments.
And Plutonic Power has in turn invested in Gordo's Liberals :

"CEO Donald McInnes said his company did not donate to the Liberal Party, in response to a caller on CKNW's Bill Good show this morning, but Elections BC records prove otherwise.
When asked why he made that claim, McInnes responded, "I don't consider that to be donations, that's buying a seat at a table."

In comments in the post below - BC's Watershed Election - commenter Racheal11 left some handy info and links to Liberal party insiders and BC Hydro execs who have recently shifted over to the extremely lucrative IPP industy : Insiders move to IPP industry

So we're good with all this, are we?
Gordo's government, former BC Hydro execs, private industry, and prominent environmentalists all pulling together ... to export power to California.
The mind boggles.
And if we decide we want our rivers back before the 25 to 50 year leases are up, are we looking at a NAFTA Chapter 11 challenge?
.
Posted by Alison at 11:50 pm
Email ThisBlogThis!Share to TwitterShare to FacebookShare to Pinterest
Labels: BC Hydro, Bute Inlet Project, Chapter 11, Environment, General Electric, Gordon Campbell, NAFTA, privatization, run-of-river, Tzeporah Berman, water

Did you read Alexandra's letter published in the Tyee.?
I'm with Alexandra on this one.
The siver lining in the big cloud Tzeporah created last week is that we should get some serious discussion about what's going on environmentally and the better solutions.
I do think tho' that Carole James should have been more flexible regarding the carbon tax.
Like Guy Dauncey, I think we need both cap and trade, and like Alexandra, I believe the BC Libs have no ultimate concern for the environment.
Apparently, Viki Husband is set to challenge Dr. Andrew Weaver's statement last week and will do this at UVic but I don't know the date/time.

I did read it, O. Excellent letter. Alexandra is the real deal and not near enough well known. Did you see this? : Libs planned frontal attack to split the green vote in 2007If you go to the UVic challenge and want to guest post something about it here just let me know.