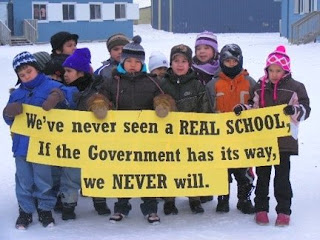 After waiting eight years for a new school, 700 students at Attawapiskat First Nations in Northern Ontario will instead be evacuated from the community to protect them from further toxic exposure to a 30-year-old diesel-oil spill under the old school. The demolition of the old school in March - nearly a decade after it was closed down due to contamination - has released noxious fumes causing nausea, vomiting, and diarrhea in the local residents.

Minister of Indian and Northern Affairs Canada Chuck Strahl doesn't see what all the fuss is about.

I just cannot believe this is still going on.
Let Chuck know you are watching. Send him a cluebat at ottawa@chuckstrahl.com and cc it to NDP MPs Charlie Angus - AngusC@parl.gc.ca. and Gilles Bisson -GBisson@ndp.on.ca who have made a video of the people in this community telling their story.
That video is up at Cam Holstrom's who has been on this for months now.
.
Posted by Alison at 1:42 am
Email ThisBlogThis!Share to TwitterShare to FacebookShare to Pinterest
Labels: Attawapiskat, Chuck Strahl, First Nations, INAC, toxic waste