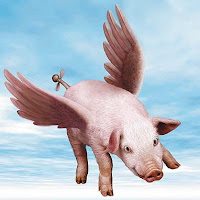 David Kirby at HuffPost :
April 5 article in La Jornada newspaper :
"Clouds of flies emanate from the lagoons where Granjas Carroll [a subsidiary of US hog giant Smithfield Foods] discharges the fecal waste from its hog barns - as well as air pollution that has already caused an epidemic of respiratory infections in the town."
More than 400 people had already been treated for respiratory infections, and more than 60% of the town's 3,000 residents had reported getting sick, the paper said. State officials disputed that claim, and said the illnesses were caused by cold weather and dust in the air.
The problems began in early March, when many neighbors of the hog CAFO (confined animal feeding operation) became sick with colds and flu that quickly turned into lung infections, causing local health officials to impose a "sanitary cordon" around the area and begin a mass program of vaccination and home fumigation.
"According to state agents of the Mexican Social Security Institute, the vector of this outbreak are the clouds of flies that come out of the hog barns, and the waste lagoons into which the Mexican-US company spews tons of excrement," La Jornada reported. "Even so, state and federal authorities paid no attention to the residents, until today..

Mike Davis, The Guardian :
"This has been a transition from old-fashioned pig pens to vast excremental hells, containing tens of thousands of animals with weakened immune systems suffocating in heat and manure while exchanging pathogens at blinding velocity with their fellow inmates.
Last year a commission convened by the Pew Research Center issued a report on "industrial farm animal production" that underscored the acute danger that "the continual cycling of viruses … in large herds or flocks [will] increase opportunities for the generation of novel virus through mutation or recombinant events that could result in more efficient human to human transmission."
The commission also warned that promiscuous antibiotic use in hog factories (cheaper than humane environments) was sponsoring the rise of resistant staph infections, while sewage spills were producing outbreaks of E coli and pfiesteria (the protozoan that has killed 1bn fish in Carolina estuaries and made ill dozens of fishermen).
Any amelioration of this new pathogen ecology would have to confront the monstrous power of livestock conglomerates such as Smithfield Farms (pork and beef) and Tyson (chickens). The commission reported systemic obstruction of their investigation by corporations, including blatant threats to withhold funding from cooperative researchers ."
.
New swine flu info at Public Health Agency of Canada and Flu Wiki
.
Posted by Alison at 12:17 pm
Email ThisBlogThis!Share to TwitterShare to FacebookShare to Pinterest
Labels: agribiz, factory farming, health, swine flu

Wouldn't it be a scream if neoliberal deregulated corporate america brought us a great depression AND a worldwide killer flu epidemic?

You bet it would!

And then, while we're all unemployed and dying of fever in the streets, we'll be carried away by the floods produced by global warming.

And then "smalldeadanimals" will issue an abject apology for even existing and we can join our shaking, water-logged hands in friendship and rebuild.