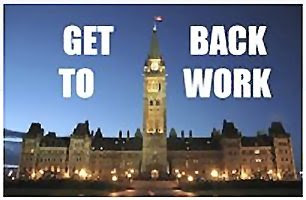 CANADIANS AGAINST PROROGUING PARLIAMENT
On Facebook
.
Meanwhile, Alberta Con MP Brent Rathgeber, who sits on both the Justice and Human Rights Committee and the Public Safety and National Security Committee, made this statement to his local paper yesterday about the proroguing of parliament (h/t Aaron Wherry via Scott):

"Democracy and Parliament are not being sidestepped — they are only being suspended.
We have received six emails and phone calls telling us it was a mistake. I don’t think it is a significant issue in the minds of Canadians.

Most Canadians don’t follow the day-to-day operations of Parliament at the best of times, but during the Olympics any attention they might have had will be quite rightly focused on what’s going on in Vancouver and Whistler."

Only six emails you say?
You can email Brent at Rathgeber.B@parl.gc.ca
Telephone: (613) 996-4722
Fax: (613) 995-8880
Be sure to copy Steve on this - pm@pm.gc.ca - in case he hasn't heard anything about it either.
.
I also liked the bit where he explains it's just as well that suspending democracy has shut down the Afghan detainee issue, lest foreign Olympics visitors hear about it :

"...that is not the kind of reputation of Canada that I think we want our international visitors to depart with."

Hey Brent, did Steve authorize this interview? Coz I'm thinking not.
.
Posted by Alison at 1:33 am
Email ThisBlogThis!Share to TwitterShare to FacebookShare to Pinterest
Labels: Brent Rathgeber, Owelympics, proroguing democracy, Stephen Harper

Heh. The trouble with Steve suspending parliament and sending his troops back to their boonies is that they are all going to be shooting their mouths off for two months:
http://www.stratfordbeaconherald.com/ArticleDisplay.aspx?e=2251368

Good one.
Yes, I imagine there will be lots more of these. What a wanker.

From Ian's link on Con MP Gary Schellenberger's interview in his home paper :
"The Olympics in Canada were another good reason to prorogue Parliament, he added.

"If we are sitting, how do MPs get to those events," he said of the Olympic games. "It makes sense that we are not sitting."