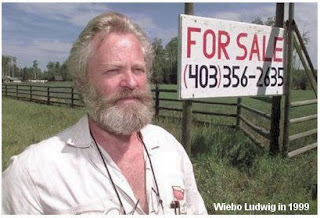 I don't claim to be any kind of authority on Wiebo Ludwig - for that you can read Andrew Nikiforuk's Saboteurs - but in all the considerable coverage of Ludwig's arrest today in connection with six cases of explosions on EnCana's gas pipelines, I notice the media's accompanying history of Ludwig makes no mention of the RCMP blowing up a well site last time they were building their case against him so here's a reminder.
.
Ludwig's war on Big Oil began with his belief that sour gas and industrial pollution was endangering the health of his family and livestock. This was confirmed for him when his grand-daughter was born dead. Unable to achieve satisfaction in the courts, Ludwig was convicted in 2001 on five charges related to vandalism of oil industry equipment and served two years of a 28-month sentence.
.
Ok, Operation Kabriole ...
.
CBC, Nov 10, 2000 : RCMP bombed oil site in 'dirty tricks' campaign

The Mounties bombed an oil installation as part of a dirty tricks campaign in their investigation into sabotage in the Alberta's oil patch.
The revelation came at the bail hearing Thursday of two farmers who the Crown says have turned their complaints that oil industry pollution is making their families ill into acts of vandalism and mischief.

Dubbed "Operation Kabriole", the RCMP's intention was to help an informant
get closer to the two men police suspected were behind vandalism against the oil
and gas industry.

Wiebo Ludwig and Richard Boonstra were arrested and charged earlier this month.

"Operation Kabriole" was planned and executed with the direct involvement of a Calgary based oil and gas business. Alberta Energy Company has a big operation in the Peace River country.

The RCMP's original plan was to blow up one of AEC's trucks. The company convinced the police to change the operation even though AEC had already given its approval, offered up a truck to be bombed and said it would pay for any major damages. Company officials were having second thoughts.

According to the RCMP's own files, the head of AEC's northern operations met with the police to say his bosses were concerned that bombing a vehicle would cause 'undue stress and fear' for employees driving company trucks.
So the company offered an alternative, a shed covering one of its "out of service" well sites not far from the suspects' property.

The bomb was set off Oct. 14, one week before AEC hosted two tense and emotional town hall meetings. Worried residents who turned out, were told by an expert, who was flown in by AEC, that they were the victims of 'eco-terrorists'.

Except it wasn't.
.
This time Ludwig has been charged his lawyer says he will be charged with extortion.
Extortion. Description in the Criminal Code: 346(1):

"Every one commits extortion who, without reasonable justification or excuse and with intent to obtain anything, by threats, accusations, menaces or violence induces or attempts to induce any person, whether or not he is the person threatened, accused or menaced or to whom violence is shown, to do anything or cause anything to be done."

To do anything or cause anything to be done. That's pretty broad.
Maybe this time he wrote a letter.
Still, an RCMP fishing expedition is better than blowing up a shed.
.
Posted by Alison at 10:17 pm
Email ThisBlogThis!Share to TwitterShare to FacebookShare to Pinterest
Labels: domestic terrorism, eco-terrorism, Operation Kabriole, Peter MacKay, RCMP, Wiebo Ludwig

What else could the RCMP do when he wouldn't accept delivery of their standard one ton of fertilizer CONtrivance?

Released without charges. I don't see how he could be personally responsible for the bombings, because surely they would have been watching him.

"150 RCMP officers from across British Columbia and Alberta have descended upon Mr. Ludwig's Trickle Creek Farm, bringing dozens of vehicles, a helicopter and even their own portable toilets"

Security theatre for the Americans benefit prior to the Olympics

the plot thickens.
its too bad also about the death of the young woman from a shot that, if, i have the story correct, ricocheted into a vehicle she was in with some young men who had driven onto the property in the wee small hours of the morning doing wheelies,
some people in the area still comment that it was a murder.
no one was charged but the bad feelings remain.
I hadn't heard about the RCMP blow jobs and find it strange that the press seem to be ignoring this aspect and ofcourse focusing on the "eco terrorist:

I watched a bit of this on the tube- helicopters flying overhead at night, rcmp squad cars buzzing up and down the road, and a five day search warrant must be some kind of record.
This is harrassment. The rcmp must think Ludwig knows who did the recent bombings.
In the same way, the joint rcmp/oil patch bombing operation was meant to terrorize the locals.