I am the pro rogue 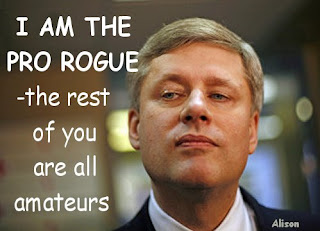 "Go searching for the last time a Westminster-style parliament was shut down to free its leaders from unwanted censure or scrutiny — and you'll end right back in Canada, where you started.

It turns out, no other English-speaking nation with a system of government like ours — not Britain, Australia or New Zealand — has ever had its parliament prorogued in modern times so that its ruling party could avoid an investigation, or a vote of confidence, by other elected legislators.

"The strength of the federal government — and the prime minister's own authority — must flow through Parliament. If Parliament is weak, and if the prime minister ignores its members and tries to rule without their consent, then his legal right to govern evaporates."
.
Posted by Alison at 1:22 am
Email ThisBlogThis!Share to TwitterShare to FacebookShare to Pinterest
Labels: proroguing democracy

If only stevie would evaporate and do us all a favour . . . .