A plea from the People of the Talking Snake 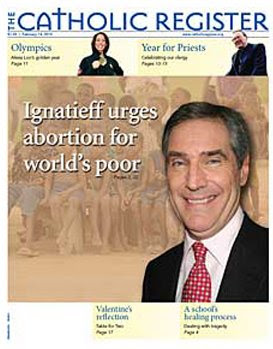 On the February cover of The Catholic Register, the Church of the Talking Snake makes yet another desperate public plea to jetison their charitable status so that they can pay taxes just like everyone else :

Collins released a statement on Feb. 4 in response to Ignatieff's public calls for the government to include contraception and abortion funding as basic components of a new foreign aid strategy to improve maternal and childhood health."

Well, actually Iggy only said he wouldn't support any new foreign aid changes from Harper that would limit access to them, but hey - these are minor details when you're launching a campaign to get your fair share of recognition from Revenue Canada.

Collins : "There are so many other steps that can be taken to promote maternal and child health throughout the world."

Archbishop Collins went on to suggest instead "clean water, food and immunization", measures which have at best an uncertain track record in preventing the spread of AIDS/HIV and STDs and the birth of yet another child you can't feed.

So far, attempts to determine whether Harper is about to reverse 30 years of Canadian foreign policy funding support for access to contraception and safe abortion have proved fruitless. The Talking Snake couldn't have done better himself.

Posted by Alison at 11:38 am
Email ThisBlogThis!Share to TwitterShare to FacebookShare to Pinterest
Labels: Canada's foreign policy, Iggy, religion

Talking snake? You'll have to explain that one to me.

Gah! Tea on my keyboard.

Thanks for the laugh, Alison.

I was raised in the Church of the Talking Snake. 40 years on I'm sometimes not sure I've completely escaped.

This made me laugh too. Sarah Silverman should be running the world.

Sorry, that should be - You and Sarah Silverman...