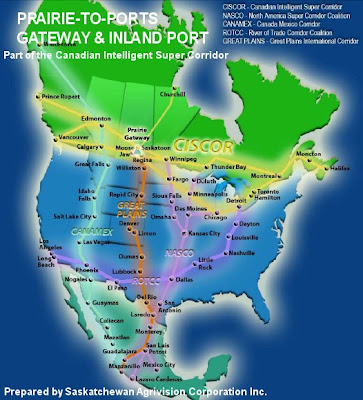 Haven't heard much about the NAFTA Superhighway Trade Corridor since it got promoted from a conspiracy theory to a US Dept of Energy plan called the Western Energy Corridor, embraced by Alberta, Saskatchewan, Manitoba and the US Western Governors' Association, and now known as the Asia-Pacific Gateway and Corridor Initiative.


But it cropped up in the news today.


CBC : Regina farmer upset about expropriation of his land

"Questions are being raised about the Saskatchewan government's role in a massive rail and warehousing project involving grocery giant Loblaws.
The province has used its legal powers of expropriation to obtain farmland for what's called the Global Transportation Hub."

The Global Transportation Hub, courtesy of the Gov of Sask :

*The GTH is located in the middle of Saskatchewan, which provides centralized access to the North American economy


"Since the project was announced two years ago, the province has also expropriated land for Loblaw Companies Ltd. to build a one-million-square-foot (92,903 square-metre) warehouse and distribution centre.

John Law, head of the government-created authority managing the warehouse project, said Loblaws would not have considered Regina for its warehouse if it had been forced to negotiate for land.

Faced with the prospect of losing a major investor, the government had to act quickly and so it did, Law said. "

So in order to further its Nafta Trade Corridor ambitions, the government of Saskatchewan expropriated land from a farmer for the benefit of a corporation.


Good to know.
.
Posted by Alison at 1:52 am
Email ThisBlogThis!Share to TwitterShare to FacebookShare to Pinterest
Labels: NAFTA Superhighway

The numbers games they're playing are ridiculout, re: jobs. And they forgot to mention the jobs in the province that have been lost thanks to this project.

The media interest in the Nafta Corridor dissipated when it got pwned by the far right in the US of A and now no one else will touch it.
Jobs, jobs, jobs! say the premiers.
Will be interesting to see how this will play out now that the provinces have lost their procurement powers to give any jobs resulting from it to Canadian companies.

I have to admit that Canadian Intelligent Super Corridor sounds a lot cooler than the old Trans Canada Highway.
With any luck the whole thing will be up and running when the next oil price shock happens. Must remember to stock up on popcorn.