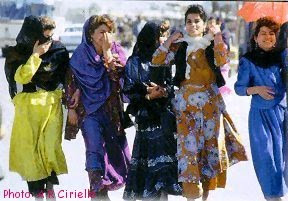 Thirty years ago in 1980, Canada joined the U.S. in a 64 country boycott of the Moscow Olympics to protest the Soviet invasion of Afghanistan.
.
Today, under cover of wall-to-wall Olympics news, Canada has joined 15,000 coalition troops in Obama's assault on the town of Marjah in Helmand province, the biggest offensive since the U.S.-led invasion of Afganistan in 2001.
.
900 families have fled ahead of their arrival.
Yesterday 12 civilians including 6 children were killed when two NATO-fired rockets missed their intended target by 300 meters. Gen Stanley McChrystal sent along his regrets. Today five more civilians were killed in a NATO airstrike in Kandahar.
.
The photo shows women university students in Kabul in 1995.
Prior to the CIA-backed civil war in Afghanistan and the beginning of the Taliban rule in the mid 90's, 50% of the students and 60% of the teachers at Kabul University were women. 70% of school teachers, 50% of civilian government workers, and 40% of doctors in Kabul were women.
.
Posted by Alison at 12:56 pm
Email ThisBlogThis!Share to TwitterShare to FacebookShare to Pinterest
Labels: Afghanistan, Olympics, Operation Enduring Freedom

RAWA 'came a long way' some time past. Meantime you might have a look at a straightforward description of what's going on
http://www.opednews.com/articles/The-Last-Station-Surging-by-Chris-Floyd-100213-684.html

Alison means a long way in a bad way, opit. That's such a sad picture.
Whatever their flaws, the Afghan communists gave women their rights and built them schools. Thanks to Charlie Wilson and CIA meddling, it will a very long way back for Afghan women now.

Opit's link to Floyd :
The Last Station: Surging Into the Savage Past in Afghanistan