BC Greenwash and Wear 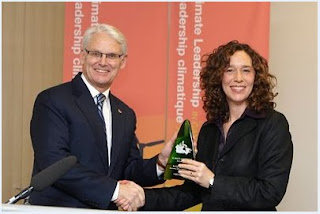 Environmental activist Tzeporah Berman of Forest Ethics presents BC Premier Gordon Campbell with a "green award" at the Copenhagen climate conference in December 2009.

This is the same Gordon Campbell who supports the Grizzly bear hunt and open-cage fish farms, the Gateway Pacific and twin Enbridge pipelines running from the Alberta tar sands to Kitimat, the proposed revoking of the moratorium on off-shore drilling, coalbed methane development, the gutting of the BC Environment ministry, and the privatization of BC rivers for run-of-river hydro projects.

Berman is executive director of Power Up Canada which promotes those privately owned run-of-river projects, which, under Gordon Campbell, forces the publicly-owned BC Hydro to buy power from them at exorbitant higher-than-market rates while being prohibited from developing its own green energy initiatives.

Today, 19 private power producers, including 14 run-of-river projects, were awarded agreements in BC, with 28 more expected by the month's end.

On February 13th, Greenpeace International announced it was hiring Tzeporah Berman as director of its global climate and energy campaign.

So, I guess "activist" in this instance references being active in LINO circles, eh, Lady Alison?

Yes, I think it is, right up there with Greenpeace's decision to partner up with Coke.
Berman spent a long time on the outside, spent it getting inside, and is gambling her rep on being more effective inside, or as she puts it : campaigning not complaining.
Corps love to get that cover though, giving a little to take a lot.

Her and David Suzuki have no credibility in my books. They sold it to Corporations.

Sign the statement to Greenpeace
You'll see many friends there.