Inside the new recalibrated Afghan committee 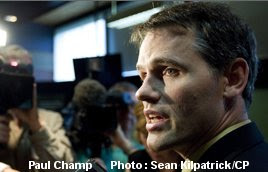 Back in 2007 the Cons claimed that all the Geneva Conventions do not apply in Afghanistan because we are not officially at war with Afghanistan. Yesterday in the Afghan parliamentary committee, Con MP Jim Abbott attempted to resuscitate that position.
.
Appearing as a witness before the committee, Paul Champ, human rights lawyer for Amnesty International and the BC Civil Liberties Association, advised that the UK suspended detainee transfers in June 2009.
If the Brits still think the risk of torture is too great, he asked, why does Canada think it's safe, particularly in light of the 2009 report from the US State Dept dated March 11 2010 regarding continuing reports of detainees being beaten, subjected to elecric shocks etc?
.
Hawn asked whether it is appropriate to impose Canadian standards on Afganistan.

Champ : "Prisoners in Canadian corrections facilities are not subjected to electric shocks or beaten with electrical cables or hung up for days."

Dosanjh : "Are you suggesting that we as Canadians, the Canadian government in particular, with the evidence before us, are in breach of our obligations vis a vis the Geneva conventions?"

Champ : "Yes and also the convention against torture and human rights [I didn't catch it]."

Dosanjh ; "Is it your view that the government of Canada today if taken to court would be likely to be found in breach of international obligations?

Champ : "I do ... Prohibition against torture is a non derogable duty."

Champ : "I would disagree with you that the Geneva convention does not apply to the armed conflict in Afghanistan."

Abbott : "Who was the other state?"

Abbott : "Are you chery-picking the Geneva convention?"

Champ : No I don't think so.
Common Article 3 applies in all conventions 1,2, 3 &4 . It's the prohibition against cruel and inhumane treatment and I think any lawyer would agree with me that it applies in this conflict."

There was more showboating from Abbott about docs leaked in the US "sending Osama bin Laden back to his caves" and "damage to soldiers from the complete public release of all docs" - which the unflappable Champ responded to by explaining that what is needed is a functioning system for dealing with all this and no one has suggested full scale public release of the docs and for instance he for one does not expect to see them.

Hawn opined that Champ is an employee of 2 orgs that are fighting our government so it's all just a partisan political witch hunt and we should move on to other matters.

Bachand reminded Hawn that the Cons boycotted the committee before xmas and then prorogued for a month so it's pretty rich they now just want to move on, at which they all went "in camera" for a fight.

I do not see how we can "move on" as long as we have a government that does not believe in prohibitions against torture.

UPDATE : Dave explains yet again why the Cons fiddling around with definitions of torture endangers the very troops they purport to champion as they hide behind them.

Based on these latest developments one can only wonder if that really was John Yoo that I saw sneaking through the Peace Arch on Sunday when we returned from Spring break on the Oregon Coast.

Accordingly, we are not at war and should give all our soldiers in Afgagistan Tasers instead of rifles. Then they would not have to hand the (detained) over to the()to be ?. I sometimes think with words like 'detained' the language itself has become terrorism.

Holy shit. Where did you get this?

Anon : Chilling, isn't it?
House of Commons Committees.
Click date of meeting on committee calendar.
This time there was audio feed only. Sometimes you get vid and minutes; other times it's locked.
I wish more people tracked it.

Zee : Right on about language terrorism.
I've lapsed back into calling the prisoners detainees again myself.

Hey there, Ross. Did you happen to mention Nuremberg to him?

The amalgamation of our troops from essentially being interchangeable with UK or USA troops to full NATO interchangeability in the US/UK-sponsored 'land war in Asia' - an interesting bit of 'Mission Creep' for an organization devoted to keeping the shipping lanes in the North Atlantic open - has poorly known aspects ( secret ones too ) relating to escape clauses meant to turn Nuremburg Conventions into a selectively applied charade - death penalty notwithstanding - where nobody gets to enforce them.
It will be interesting to see where Ashcroft Can Be Held Accountable for Post-9/11 Wrongful Detentionhttp://www.democraticunderground.com/discuss/duboard.php?az=view_all&address=102x4312304 goes in context with setting any precedent on this.
Given American Service Members Protection Act 2002 and Bilateral Immunity Agreements from http://opitslinkfest.blogspot.com/2010/01/law.html and Intelligence sharing between Great Britain and the United States dates back to First World War from http://opitslinkfest.blogspot.com/2009/10/military.html the same threat the CIA gave to the UK to cut them off from access means National Security has a no-brainer to override : nor will any plea I can think of have any effect.

"
Abbott : "Are you chery-picking the Geneva convention?"
"

I would seem to me that Abbott (and Yoo and the gang) are cherry-picking not only the Geneva Convention, Basic Human Rights and basic decency.

I am not officially at war with the Harper Government, so does that mean Abbott/Harper/Stockboy can have me tortured? Of if I declare official war on Pee Wee Harper and his cadres, can I shoot at them knowing that if I am captured I must be handled under the terms of the Geneva Convention - and released unharmed when we kiss and make up?

It would seem to me, in an area of confict (the jurisdiction of the Geneva Conventions), that once behaviour/activity wasn't covered by Geneva, it would then default to being covered under basic criminal law - in that jusrisdiction and basic Human Rights and International Law and I didn't realize TORTURE was legal under ANY of those systems either.

Not to mention it is morally repugnant and creates justification for its use by those upon whom it is inflicted.

kootcoot
In response to your note about domestic criminal law in the occupied country :
Afghanistan Enacts Law That Gives War Criminals Blanket Immunity http://www.truthout.org/afghanistan-enacts-law-giving-blanket-immunity-war-criminals57746
Trust lawyers ( I prefer the Newfie 'liars' ) to analyze what can go wrong and arrange relief from pressure.

Koot : Champ made much the same argument.

Dave's link at the bottom here excellent as ever.