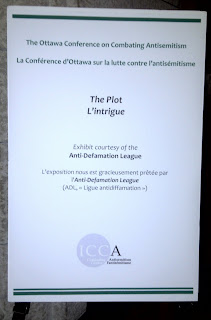 Live-blogging from the Ottawa Conference on Combating Antisemitism today, the intrepid Kady does her level best to find out what The Plot - a secret exhibit from the US Anti-Defamation League that is off-limits to media - is all about.

I don't know either but I'll lay you odds that it doesn't include this B'nai Brith Canada poster - with its pictures of Nazis and allusions to "World Domination" - which graced the entire back page of the Natty Post exactly one year ago today.

Steve weighed in on the ever-expanding definition of the "new anti-Semitism" in his remarks to the opening of the Inter-parliamentary Coalition for Combating Antisemitism conference in Ottawa today :

"Harnessing disparate anti-American, anti-Semitic and anti-Western ideologies, it targets the Jewish people by targetting the Jewish homeland, Israel, as the source of injustice and conflict in the world and uses, perversely, the language of human rights to do so,” the Prime Minister said. “We must be relentless in exposing this new anti-Semitism for what it is."

Steve then went on to complain about the "bruises" he's taken for his courageous defence of what is actually only the most right wing of Israeli politics and their rapture-ready fans here in North America.

Boris takes a good look at those 'bruises'.