Sisters in Spirit shut down 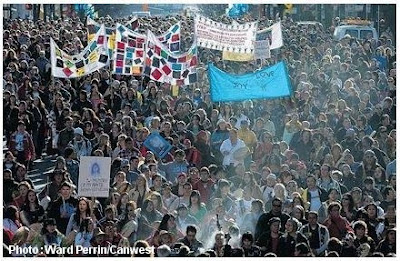 It was only last week that Status of Women Minister Rona Ambrose praised Sisters in Spirit when she announced details of a $10 million national strategy to address "the disturbing issue of missing and murdered Aboriginal women" :

"The journey truly began with an initiative called Sisters in Spirit that was led by the Native Women’s Association of Canada. The association has undertaken an incredible amount of research... they have brought to light the shocking extent of these horrendous acts of violence."

Yet Rona's Status of Women government webpage announcing the new strategy makes no mention of Sisters in Spirit at all and now the APTN News reports that Sisters have been excluded from receiving any of that $10M.
Instead they must apply to Status of Women for less money under new rules which will prohibit them from continuing to use the name Sisters in Spirit, or maintaining and extending their research database of nearly 600 missing aboriginal women, or lobbying government.
.
Con MP Shelly Glover, Parliamentary Secretary for Indian and Northern Affairs :

What a perverse game Ambrose and Glover are playing. Tweeted this post as well, Alison.

WTF? The shit these Reformatories get away with never ceases to amaze me.

"Restricting funds from being used for research and policy work"

Because the Harper reformatories must directly control all research and the messaging of the results.

So the money goes to the RCMP project that will no longer highlight the unbelievable plight of aboriginal women but instead throw it into a mix of stats that will hide what has been happening in our country.

They are making up rules as they go along.

"Restricting funds from being used for research and policy work"

And lobbying. Which makes sense.

Anon : Like without the lobbying and advocacy work, we would have heard about any of the disappeared in the first place.
Who are apparently about to be disappeared all over again.

Where is mainstream media on this??? Shame!!

Thanks for sharing this Alison. I have written them all, and shared the APTN link on Facebook.

So far, Nicole Demers is the only one who has replied to my email. My MP announced his retirement today. Good riddance to Keith Martin! Next?