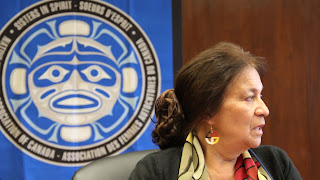 Last week APTN News reported that not only does the Cons new missing persons initiative entirely bypass Sisters In Spirit, the very group which initiated research into the nearly 600 missing and murdered FN women and girls in the first place, but SIS can no longer use the SIS name or continue their research when applying for grants.
Status of Women Minister Rona Ambrose invoked support from the Sisters' parent organization, Native Women's Association of Canada, to blow off criticism in the House :

"Most important, we are working with and have the support of NWAC "
and
"In fact, we have been working with NWAC for the last couple of years in order to implement these concrete actions."

APTN News : NWAC kept out of the loop on missing women's announcement

Native Women’s Association of Canada president Jeannette Corbiere Lavell said she was only informed by the government the day before Status of Women Minister Rona Ambrose stood in the Vancouver police department to say her government was following through on their $10 million commitment.

Lavell said the Conservative government did not consult with NWAC staff or those involved with the organization’s groundbreaking Sisters in Spirit project in the lead-up to the announcement.

"NWAC was originally led to believe that it would be invited to join in a discussion with the Department of Justice…about the allocation of the $10 million ," said Corbiere Lavell. "This did not occur."

Lavell further notes that the new initiative "reinvents" the work already done by SIS [at a new RCMP centre that will use up half the money], folds their research on murdered FN women into a general pot of violence against all Canadians, and excludes provinces east of Manitoba from access to funding.
She also confirmed Status of Women's embargo on the SIS name and continued research.
So why did Lavell stand with Ambrose on that podium in Vancouver last week and imply NWAC's endorsement?
Because, explains Lavell, they need the money and Aboriginal women have been waiting for it. They have to comply with the new SIS-squashing rules so they can access funds to continue related work.
Nice. Someone better call Ambrose on her bullshit in the House next week.
As Cathie from Canada put it : "Trying to make it disappear just like all those women have disappeared."
.
And as for Canada's conditional endorsement of the United Nations Declaration on the Rights of Indigenous Peoples this week : See Pam Palmater at Non-Status Indians.
.
Posted by Alison at 6:05 am
Email ThisBlogThis!Share to TwitterShare to FacebookShare to Pinterest
Labels: First Nations, NWAC, Rona Ambrose, Sisters in Spirit, Status of Women Canada, UN Declaration of Indigenous Rights

Gladys Radek, Founder of the Walk 4 Justice campaign for justice for missing and murdered women, is one of the 10 finalists in a CBC "Champions of Change" contest. You can help Gladys raise $25k for the cause and offset the cut funding that will be going to the RCMP's fancy new digs.