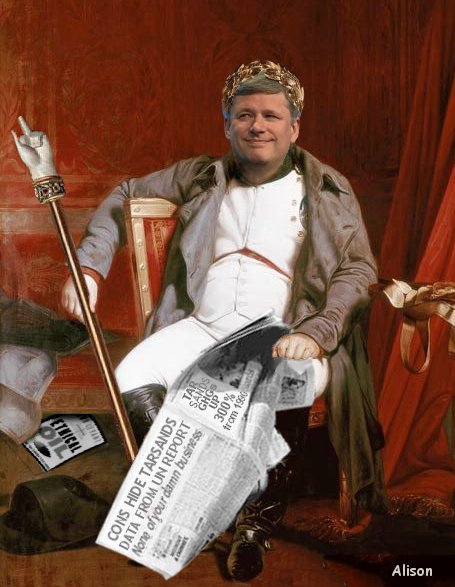 
"The federal government has acknowledged it deliberately excluded data indicating a 20 per cent increase in annual pollution from Canada’s oilsands industry in 2009 from a recent 567-page report on climate change that it was required to submit to the United Nations.

The data also indicated that emissions per barrel of oil produced by the sector is increasing, despite claims made by the industry in an advertising campaign.

And in books like Ethical Oil by tarsands apologist Ezra Levant, who wrote : "Oil sands technology continues to improve - to produce one barrel of oils sands oil takes 38 per cent less emissions now than it did in 1990."


"This also indicates a growth in emissions that is close to about 300 per cent since 1990, which cancel out many reductions in pollution from other economic sectors."

"... to promote Canada's oilsands industry, while fighting back against foreign climate change policies requiring it to reduce its pollution.

...including a "meeting with like-minded allies" from oil industry giants BP and Shell.

The action plan, prepared by the Department of Foreign Affairs and International Trade, also suggested hosting an "annual retreat" of its oilsands advocacy team in London to plan a strategy to help boost the image of the industry." 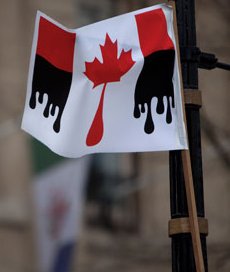 
"Britain is being accused of undermining a European-wide drive to ban forecourt sales of petrol and diesel derived from the carbon-heavy tar sands of Canada.

Tar sands were originally named in draft proposals from the European Commission which were drawn up to ensure that member states were able to meet the legally binding target of reducing greenhouse gas by 6% by 2020.


But by last year – following intense lobbying from the Canadian government – all references to tar sands were dropped."

Dear (Almost a) Lady Alison - you're right, re: DeSouza. He is pretty good.

Your Photoshop, however, is beyond "pretty good" all the way to Outstanding/Unparalleled! L-O-V-E it. Even better than bush's poodle of a few years back . . . .

Thanks, guys. Yes, It's Delaroche's Napoleon with a little David thrown in as well.
Think there's a job for me as official portrait photoshopper?

The flag in Trafalgar Square is real though. :(

You definitely should become the official portrait photoshopper - this one is divine, like the powers Harper longs for.

The petrol-super power flag is very good too.

Let us send Britain, bottled water, from a nearby stream or river by the dirty Alberta tar sands. We could also export the deformed fish from Lake Athabasca, to the Brits.

The dirty Alberta tar sands are, an abomination on the face of Canada. The dirtiest, filthiest energy in the world. And, Harper is sending this grunge, to the most polluted country in the world, China. China's pollution, even blows over to Canada. However,

Harper with his swelled head, of his election majority, expects to be the biggest shot in the world. Canada does have vast resources, and Campbell would just love to play God, over all of those country's wanting Canada's abundant resources..