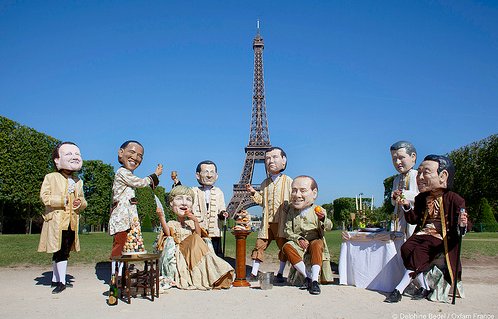 Oxfam Bigheads at the G8 in Paris


"The Prime Minister's Office said the meeting would likely advance talks on a unified border security system for the continent that have been underway since February.
The hope is that such a pact would tighten security for people and goods entering the continent, but allow Canada-U.S. border points to boost the flow of goods and vehicles travelling across the 49th parallel.

Sources say the agreement would include joint border inspection agencies, relocation of U.S. food inspectors agents to Canadian plants and vice versa, greater sharing of intelligence, and harmonizing regulations on everything from food to manufactured goods."


The maternal and child health initiative, which Harper spearheaded during the G8 summit last year, is also on the agenda. But it is "falling off the radar."


"Prime Minister Stephen Harper said Canada and the U.S will have a plan in place by the summer for a North American security perimeter agreement."

Manifest Destiny Flashback - Nov 13, 1979 : While officially declaring his candidacy for President, Ronald Reagan proposes a “North American Agreement” which will produce “a North American continent in which the goods and people of the three countries will cross boundaries more freely.”
.
Sunday Update : CBC's online version of this story : Harper, Obama talk plans for security perimeter has attracted a record 1400+ comments. From the sound of most of them I'd say reports of the demise of Canadian nationalism - looking at you, David Biette - are geatly exaggerated.
.
Posted by Alison at 6:16 pm
Email ThisBlogThis!Share to TwitterShare to FacebookShare to Pinterest
Labels: G8, Harper, Obama, security perimeter

And CBC quotes stevie thusly: "We are pleased that discussions are on track, and we expect to have an ambitious joint action plan ready this summer following public consultations."

It would be very interesting to get feedback from any members of the "public" that are consulted.

Wikileaks said, the N.A.U. is on the way. The American people are dead set against the N.A.U. They say, the U.S. was just waiting for Harper's majority, to implement this merger of, Canada, U.S. and Mexico. They are going to do this, in increments, so the people don't panic. We will be the Mexcanericans. The currency will be the Amero dollar.

The U.S.people despise Harper. They say, Harper's election win was rigged. They say, there is a petition, to try Harper and Peter MacKay with, war crimes and crimes against humanity. They say, Harper should be tried for treason. Wikileaks said, U.S. governing officials, call Harper a petty gasbag.

I don't think the U.S. people mind the every day Canadians. They fear being overrun by Mexicans. They say Canada could be overrun by them as well. The U.S. said, neither Canadian nor American citizens, can live on $3.00 per hour, so, I see their point. They also want to keep their country sovereign and free, as we Canadians want to keep our country free. I was hoping Mexico would be in the, South American Union. Mexico, will be a bone of contention for sure.

The European Union, isn't working out at all. They may have to close their borders. They fear being overrun by Africans, fleeing their war torn country.

Well, what ever happens, it's not going to be pretty. I said right from day one. If Harper gets a majority, we can kiss Canada good-bye.