The pink cabins in the orchard 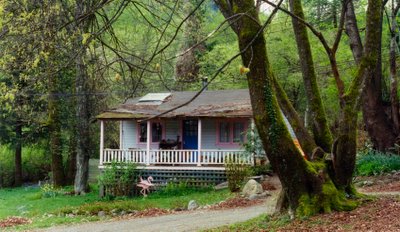 Wonderful letter from Richard Best in the Undercurrent today about the need for affordable housing here: "I think that how we manage our social diversity is a lot more significant than how we line up to get on and off the island, important as that is." Yes!

His story about living in one of the pink cabins brought back a lot of memories. There were many more cabins then and the tenants, who included Tracey Lee Hearst, Judi Gedye, Edye Hanen, Carl O'Day, Connie Wright, Suzanne McNeil, Dawn and Nelson Riley, Carlotta Smith, and I'm forgetting lots here, formed a wonderful little village.

I badly wanted to live in one of those little pink cabins and rented elsewhere on the island while waiting for one to become vacant. By this time the cabins and their tenants were under serious seige from our GVRD rep who just wanted them bulldozed and, despite the best efforts of the tenants to save the pink cabins even if they weren't going to be allowed to live in them, the GVRD for the most part succeeded. Eventually I wound up buying a house instead by default and the surviving cabins are now mostly untenanted.

Martin Clarke, a former pink cabin tenant himself, once said you can't have a village that doesn't have any people living in it. Are we ready to rebuild those cabins yet?

Posted by Alison at 1:02 am
Email ThisBlogThis!Share to TwitterShare to FacebookShare to Pinterest

It wasn't long after we arrived here that GVRD Rep. Gail Taylor and Rondy Dyke teamed to have a couple of hte camins bulldozed. Prottest stopped any further attempts and the Heritage Association was formed to protect the others. That was about 18 years ago and we still haven't seen the 1/3 1/3 1/3 plan (housing, artisan and commercial) come to fruition.

Godfrey's (Rita's) old cabin still sits rotting, being used to house books for friends of the Library. What's the hold-up? There's what, two tenants left there in not up to snuff cabins?

Am I wrong or was the pace of restoration faster before we became a municipality?

I have rain gear, fleece and a 160z hammer. If we beg scraps from the million dollar sites under construction on Bowen today, we can restore the cabins in no time flat.

Then we claim squatters' rights, because GVRD has had all the time in the world to recognize these gems for what they are. Mitch Solkowski (GVRD Parks west manager) admitted that the policy was to let the leases expire and the cabins deteriorate in order to demolish them.

We must reparate the wrongs. Give me a start date and I'll meet anyone whose interested in guerilla restoration at Seaside #2 under the hard-fought-for
blue tarp.

The whole thing is so discombobulating. (I believe that is a word verifiable in the OED)

My apologies for fingers flying between sips of medication.

Mitchell if you really want to go for this, I'm in. The big obstacle to rebuilding will be the same one that the GVRD used to demolish them in the first place - the septic fields. Get some legal help here and I'll call you after xmas.
Away for 2 weeks.

If the authorities can't handle that they're hanging themselves.

You don't even have to beg for the scraps, they're in the bin waiting and it lessens the load so doesn't cost as much for them to haul away.