Stand up stand up for Jesus.. 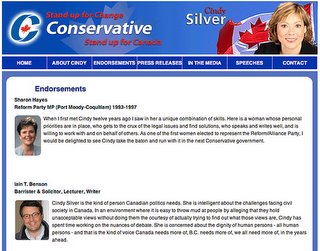 Iain Benson is smarter, more courageous, subtler of thought, better read, wittier, more accomplished and more heartful in the world than I am. His strong sense of justice and generosity of spirit are truly inspiring and he's a lot of fun. He's also a fetus-fetishist. So when he states in his endorsement of North Van Conservative candidate Cindy Silver above that "She is concerned about the dignity of human persons-all human persons", I think we can take it as given that 1)he is including fetuses here and 2) that she wants this said on her campaign site.

Directly above Iain's endorsement is that of former Reform Party MP Sharon Hayes, who gained notoriety for issuing a press release on House of Commons letterhead accusing doctors in China of "consuming human fetuses as health food". Hayes now sits on the board of 'Focus on the Family Canada', the Canadian arm of the US 'Focus on the Family', the largest religious right group in the US. They are anti-choice, anti-gay, and against all sex education that is not abstinence-only.

North Van Conservative candidate Cindy Silver tells us on her campaign website above that she converted to Christianity as a 19-year-old single mother after she began listening to the religious radio broadcasts of James Dobson, founder of 'Focus on the Family'. James Dobson recently gained notoriety for his hysterical public assertion that any deviation from a so-called 'biblical' definition of marriage would lead to "marriage between daddies and little girls"and "a man and his donkey". Cindy Silver subsequently served as legal council for Focus on the Family, during which time she wrote position papers for them fulminating against "abortion-on-demand, artificial methods of contraception, sterilization, mandatory sex education, gender equality, and homosexual rights". When these papers were cited in a Globe and Mail news article as evidence that Focus on the Family was running "theo-con" candidates in Canadian elections, West Van/Sunshine Coast Conservative candidate John Weston wrote an angry rebuttal, quoting Cindy Silver's complaint about 'graffiti journalism'. Weston himself had also been named as one of the theo-cons for the articles he had written, since expunged, from the website of Christian Legal Fellowship.

Traditionally, discussion of the private religious beliefs of public figures has been deemed to be off-limits to public scrutiny. One hopes that anyone's actions in the world are necessarily informed by their core beliefs, but insofar as religion is a private affair between a human being and their presumed god, it's really no one else's business.
However, in allying herself with an activist Christian lobby group with a publicly stated political agenda, she has forfeited her right to rely on our manners to respect that privacy. Like it or not, she's going to have to tell us what she herself will "stand up" for.
Posted by Alison at 12:32 am
Email ThisBlogThis!Share to TwitterShare to FacebookShare to Pinterest

She's not going to stand up at all - she's removed the Endorsement page you linked to from her site.

What amazes me is how the Catholic Conservatives keep their secrret clubhouse stuff going. You know, the Knights of Columbus really being "The Nights WITH Columbus" as a secret homo organization and gay sex somehow legitimized as being correct when it's done secretly as a type of coven under the eyes of GOD.

And you thought only priests and monks had the privilege!

Is it just me, or does anyone else think Iain Benson shaved off his mustache just because Alasdair MacIntyre did? Hm?

Is it just me or has Iain Benson grown a beard now to hide the fact that he shaved his moustache? Please tell me.
Iain Benson, Southwest France.(I miss you Alison!)