Nope, this one isn't about Stockwell Day 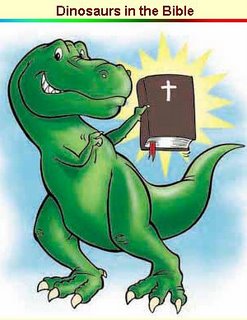 Last Sunday we had a look at SpongeDob and his spawn 'Focus on the Family Canada'.
FotFC had just announced the launch of what they refer to on their website as their new initiative - a think tank in Ottawa called the 'Institute of Marriage and Family Canada' to "research and suggest new legislation". (shudder)

I dropped by their website again today to see how the Feb 16 launch had gone, fully expecting glowing reports of how tens of people had shown up, and right there on the front page is an article promoting none other than Kent "Dr Dino" Hovind. On a Canadian website.

It's easy to make fun of Dr Dino and what he calls his "Creation Science Evangelism" : the dinosaur theme park to promote the idea that humans and dinos coexisted on an earth that's only 6000 years old, his belief that they still do, his assertion that the Grand Canyon is the result of the Great Flood and that UFOs are apparitions of Satan. When he isn't pushing 'The Protocols of the Elders of Zion', Dr Hovind's folksy speaking style could even be described as charming, but alas the 'doctor' part is also a joke, having been obtained from a diploma mill.

Even other young-earth creationists generally consider him an embarrassment so what is he doing on the front page of the Focus on the Family Canada website?
Well just listen to what he says (bold - mine):

"Hovind, who believes the Bible is literally true and scientifically accurate, says the Dover Area School Board in Pennsylvania was “barking up the wrong tree” when it attempted to require that intelligent design (ID) be taught in its classrooms.
“To me,” Hovind suggests, “the much better approach is don’t mention creation, don’t mention evolution, don’t mention intelligent design” – but instead push for textbooks that simply tell the truth. There are 50-some lies in the average textbook that are used as evidence for evolution. Get them out. End of story.” "

Not mentioning any of the controversial buzzwords - neither ID nor evolution - and going quietly about their business would be the much better approach for them at this point.
We should be watching for it.

A more thorough take on this at The Galloping Beaver
Posted by Alison at 11:46 pm
Email ThisBlogThis!Share to TwitterShare to FacebookShare to Pinterest
Labels: Evolution, Intelligent Design

Great post Alison! Of course, you know the fundie bible is very much in error. Mary and Joseph actually rode into Bethlehem on a Tricerotops.

Cheers! (And many thanks for the link.)