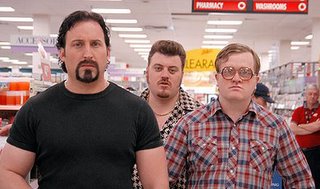 Hilarious complaints greeted this announcement, as one letter writer suggested that "foul-mouthed drug-using petty criminals" were poor representatives of the music industry - ?!?!? - and another wrote that "trailer trash" should not be representing Atlantic Canada on television.

Coz, you know, up till now, whenever we thought about Atlantic Canada, we envisioned a spunky orphan who brought joy into everyone's lives.

Will PM Stephen Harper be snapping open a brown buddy tonight and kicking back to watch his distant cousin?Personally I'm hoping for a shit-faced guest appearance by Mr Leahy and his rotund lover Randy.

Posted by Alison at 6:08 pm
Email ThisBlogThis!Share to TwitterShare to FacebookShare to Pinterest