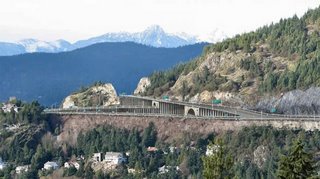 Yeah, I know, it was almost impossible not to be amused by this protest. I know I was.

Rich, white, NIMBY conservative protestors who were huge fans of both the Olympics and unfettered free-enterprise. At least they were right up to the point where they heard a P3 would be blasting a new piece of highway smackdab through their backyard to Whistler - where, it must be said, some of them also own cottages and condos.

They were rich and they were outraged.
They were hopping into the Lexus to drive a few hundred yards to Starbucks to buy lattes for the reporters.
They were very outspoken about being primarily "professional people".
Their tent city sported some of the very finest in available camping gear.

Did I mention they were rich?
Because God forbid we should get over our own class envy long enough to support environmental protestors just because they're rich.
God forbid we should realize that being a NIMBY is actually something to be proud of, as long as you aren't forcing some other backyard to accept what you reject for your own.
And God forbid we should recognize that those elderly local residents who had recently had hip-replacements and knee operations but were willing to sleep out in tents for an environmental cause they passionately believe in do not conform to anyone's definition of "hypocrite".
Transportation Minister Kevin Falcon dismissed this protest as "a small group of neighbours", saying they "have failed in the courts, they have failed in the election and they have failed in the public relations campaign."
David Emerson and Premier Cambell wouldn't return their calls.
The Squamish Nation, very big supporters of the Olympics, were quick to distance themselves from Squamish elder Harriet Nahanee, one of the first to be arrested, saying "she does not represent the Squamish Nation".

Starting to feel sorry for them yet? That wealth starting to matter a little less here?
Their relative wealth had insulated them for years against any realization that the Campbell government doesn't represent them any more than it does the rest of us if they don't play along.
OK, I think they get that now.
I intend to pitch my tent with these rich guys in the next go-round if they get one.
Posted by Alison at 5:29 pm
Email ThisBlogThis!Share to TwitterShare to FacebookShare to Pinterest
Labels: Eagleridge bluffs

You will be in good company, not all of them were moneyed. Betty K. got 10 months today, also in the court building was the fellow that ran over and killed a pedestrian, then drove away. He *might* get a year.