From CTV :
"On Wednesday night in Calgary, Justice Minister Vic Toews insisted all questions be screened in advance during a town hall discussion on the government's get-tough-on-crime bill."
Well how terribly Bush of you! And at a "town hall" too.
OK, what have you got?
From CBC :
"Federal Justice Minister Vic Toews outlined the Harper government's justice initiatives Wednesday night at a town hall meeting in Calgary.
"I don't think that anyone can seriously say that our streets today are as safe as they were 20 years ago," Toews told about 150 people at the meeting in the riding of Calgary West."

Really? How about compared to 10 years ago?
That would certainly qualify as a trend, wouldn't it? 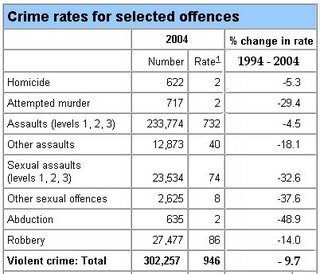 OK, so we can seriously say that our streets are safer than they were 10 years ago.
Next.

"Toews concedes the government has estimated its prison budget might increase by up to $300 million, but he says it's worth the cost."

Even Bushier!
While looking for statistics on violent crime, I ran into this page from the Corrections Service of Canada, dated Sept 2000. There's a lot of interesting data there but their conclusion seems particularly pertinent here :

"American politicians have often found it in their self-interest to use fear of crime as a strategy to win elections, by promising to wage war on crime.
It is ironic that in the United States, as in Canada, crime rates have been declining since 1991. However, by waging war on crime they have managed to double their prison population without making the United States a noticeably safer society than Canada. We would do much to advance the public interest if we can better manage the fear of crime than our American neighbours."

No comment.
Posted by Alison at 3:46 am
Email ThisBlogThis!Share to TwitterShare to FacebookShare to Pinterest
Labels: Crime, Toews

I appreciate your talent on this blog for both opining AND informing; your knack for digging up relevant data to counter propaganda. It's infuriating to me that this method of repeating something often enough so that the general public, unwilling or unmotivated to dig further for truth, comes to take it as the truth. Bold-faced lying- case in point Toews - seems to work!! Next they'll be using chain e-mails to send out little messages about fabricated crime events in our streets - SEND THIS TO TEN FRIENDS NOW... anyway, this is a good, meaty blog.

Politician love the "law and order" issue because they can use anecdotes and scary stories from the newpaper to scare the bejebus out of the voters and smear their opponents ( ie "Paul Martin let Karla Homolka out of prison") They get to strut around and look tough by promising to get the bad guys. They won't be "soft on crime." They won't "allow criminals to sit leisurely in country club prisons" and other bullshit.

In point of fact it is all mostly bullshit. Sending people to jail for lengthy periods of time for compartively minor crimes such as drug possession, small volume drug dealing, petty theft etc on a first offense tends to turn them into career criminals, whereas very short custodial sentences followed by lengthy probabation with strict conditions (halfway houses, anger-management and substance abuse programs) tend to produce considerably less recidivism and cost less in the long run.

But people want revenge. They want to think the bad guy is gonna suffer and that no one who commits a crime is an actual person with feelings and motivations and thoughts like themselves.

Imagine you're a 20 year old kid who's seen too many crappy movies and you stick up a gas station or a corner store with a kitchen knife while high because your landlord is breathing down your neck and the pogey has run out and you've drank up or smoked what little money you had.

You are irresponsible and have poor impulse control, don't have many job skills and you're fairly lazy. Okay, you're not exactly a paragon of humankind, but should your life essentially be over because you did something stupid?

Because that is what a five year prison sentence is going to mean to a 20 year old. Yes, he will be out of jail in three years, but those three years he spend in the company of hardcore killers and rapists are either going to utter break him - -rob him of what little self-respect and dignity he ever had -- or they are going to harden him, turn him vicious and amoral. He may have gone into prison a stupid kid, but he is going to come out as a hardened criminal.

For the rest of his life he is going to be a con that no one wants to give a job to, who has spent the same amount of time in the close company of the worst people imaginable that other, more fortunate people, spent at university.

Think of how the experience of going to university or college or working your first real job after leaving school and mom and dad behind shaped you. Now imagine that time was spent in Milhaven Pen, trying not to drop the soap in the showers, lifting weights and trying to grow eyes in the back of your head to avoid getting beaten or shanked for looking at somebody the wrong way. Think you'd be the same person?

When someone commits a serious crime, by all means send them to prison. But lets consider what prisons are versus what they should be. The purpose of a prison should be to reform the criminal, not warehouse them and make sure they meet lots of other crooks and learn new ways to commit crimes. The purpose should be to turn them into productive members of society, not dehumanize them, break their spirit and convince them they are scum. The purpose should be to make them realize the damage they have done to other, make them repent for it and ensure they don't commit the same crime ever again - not satisfy some primitive need for vengence on the part of society. It is called "Corrections Canada" not "Punishments Canada"

Most people end up in prison because of a lack of empathy and compassion and intelligence on their part. Is setting up a justice system that exhibits and reinforces those same traits the best way to deal such people? I think not.

Sorry to have gone on and on, I just sort of got rolling -- I'll turn this into a post of my own over at the woodshed and stop clogging up the Creekside with my rambling.

Rev : By all means, keep on 'clogging'!
This is great. I'll catch the rest over at the woodshed.

Cheesewhiz : Most kind.
Came home from a very crappy day to your lovely compliment. Thank you.