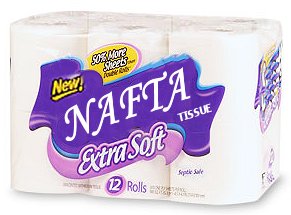 David Emerson hailed the new improved softwood lumber agreement as "a nation-to-nation agreement, it's a treaty."

Ha! Why, sure, if by "treaty" you mean another 2-ply extra-soft super-absorbent guarantee that the US will treat like so much used toilet paper whenever it suits them. And what do we get out of it? In return for $1 billion, the US promises not to bother losing any more NAFTA court battles to us for the next two years.

Harper released a statement hailing the agreement as "a great day for Canada" and CTV further reports:
"the Tory hope is that, with softwood out of the way, Harper and Bush can concentrate on issues like global security, water exports..."

And photo ops. Lots and lots of photo ops.
You're not fooling anyone, you know.

Update : Ross at The Gazetteer is all over this.
And Canadian Cynic weighs in on water exports.
Posted by Alison at 2:12 am
Email ThisBlogThis!Share to TwitterShare to FacebookShare to Pinterest

but, but, alison, you mean they aren't being upfront??? NOOOOOOOOOOO! say it ain't so :)

the flaccidwood deal , er, treaty, will be honoured just like the first nations treaties, right? or should that be RIGHT.

gotta go, have some big firs and cedars to cut down and ship to washington.

Long term stability with an escape clause. I should've got one of those when I got married. Doh.

Is this toilet paper available at the general store?
if so, how do i avoid the long summer people/tourist line-ups?
Plebe

Plebe : This tp is available anywhere that foreign ownership is disguised as foreign investment. As it is usually marketed as a local brand, anything on the shelf will probably be NAFTA tp.

Avoiding line-ups? I find that asking them if they live here and then butting in ahead of them when they answer no is usually effective. Alternatively, making use of your time in the lineup to aggressively panhandle or practise the most difficult parts of an aria or sign people up for the Marxist-Leninist Party usually thins out the line-up considerably too.
Hope this helps.

Water exports come under provincial jurisdiction, meaning that we have no national water policy to speak of anyway.
You on this?

Jan - check the division of powers as laid out in the Constitution documents.

one of canada's top guns for water negotiations, wendy holmes, lives here on bowen. it is ultimatley a federal thing.

WATER EXPORTS AND THE NAFTA

Dear Alison,
I took your advise today. The NAFTA tp was in abundance at the General Store, along with the generic version, 'Heir Haprer's Choice'.

After butting in front of two couples who had sailed up here from the San Juans, I now have two black eyes and the imprints of leather Gucci all-purpose training shoe soles over my body.

My Marxist literature got strewn about and ripped into shreds but Dave and Bill from the Recycling Depot were on hand to pick it up.

Does this come from being short?
Plebe

And on this the putative 'Eve Of Destruction' for all things Canuckistan, I've chucked policy for the moment and am really wondering how Mr. Harper is going to P(r)imp his photo-op.

The deal Harper has cobbled together in his rush to curry favour with Bush is an appalling one, for the reasons mentioned, and others.

When Harper takes this deal to Parliament, it deserves to be altered. The Bloc, NDP and Liberals have the majority of the seats in Parliament, and it is the duty of their MPs to act in the interests of Canada and their constituents.

If the Liberals allow this deal to go through (either by ineptitude – such as the last budget debacle, or disorganization – due to the leadership campaign absorbing so much of their efforts), then they deserve to be punished by the voters come the next election.

If course, if by their conduct Liberal MPs (especially the contenders for leadership of the party) show that their failure to stand up to Harper on yet another rushed exercise, springs from cowardice, then the voters should take note of this, and not grant them a government minority or majority until they acquire some intestinal fortitude.

This softwood deal is more of a test of the calibre of the Liberal leadership contenders, than of Harper. We have measured Harper, and he is wanting.

Now let us measure the Liberal Party, and see if they deserve the votes of Canadians.