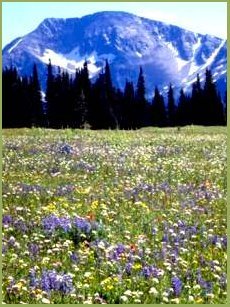 First up, 12 provincial parks including Wells Gray and Golden Ears will be opened up to the private development of "major resorts" with up to 100 rooms, tennis courts, golf courses and swimming pools because ... well, let's just let BC Environment, I repeat BC Environment, Minister Barry Penner explain :
"The population is getting older and not everyone who stays in a park wants to sleep on the ground in a tent anymore."
Oh yeah, he also mentioned something about the 2010 Olympics too.

Next - Clayoquot Sound and logging.
No, of course not all of it, silly. Only a quarterrter of it - 90,000 hectares out of 350,000.
Jim Lornie, provincial co-chair of the Clayoquot Sound Central Region Board, said a total logging ban was never contemplated by his group and besides - First Nations along with Interfor are partners in the logging.
"You really have to factor in the interests of first nations here," he said.

Say, you aren't against First Nations and old people, are ya?

More on Clayoquot shenanigans from timethief
Posted by Alison at 3:38 am
Email ThisBlogThis!Share to TwitterShare to FacebookShare to Pinterest

Sometimes it seems like we just fight the same battles over and over again.
Think we'll get 12,000 out to Clayoquot again this time?

Maybe... but they'll likely draw it all out to the winter months to start moving, when it will be too cold for most people to mount a protracted stay.
But, come Spring break-up, the people can start mobilizing again.
However, this time the First Nations won't be standing up for Clayoquot.
Some good news: apparently the issue is to be put to the public.
We'll see.