Steve and Sandra do the laundry 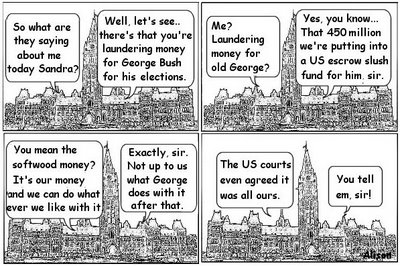 CathiefromCanada has the links. Some more thoughts from POGGE.
And Accidental Deliberations has been on this since the beginning.

Update : Today's Toronto Star manages a muted reference to the slush fund. And that's it from the print media.


"International Trade Minister David Emerson said Thursday that threats to vote against softwood lumber legislation show the Opposition parties are anti-American.
"I know that both the NDP and the Liberals are staunchly anti-American in their inner core," Emerson told The Canadian Press in an interview Thursday."

What a dick.
.
Posted by Alison at 7:03 am
Email ThisBlogThis!Share to TwitterShare to FacebookShare to Pinterest
Labels: David Emerson, softwood lumber

For once I agree with you about something. Nice toon. Think the Libs can dance to it?

Sept1 is the deadline so this story only has two more days to go mainstream. If it doesn't, the Libs won't feel any public pressure to stand up to it.
I'm not hopeful.

I like this Steve and Sandra thing you do, btw.

Jeezus...thanks for posting this Alison. This is insane.

Ok, can we have somebody else run the country now? Please?

makes me think of what muni hall would be like if 'the blogging mayor' had gotten in.