Coming soon to a city near you 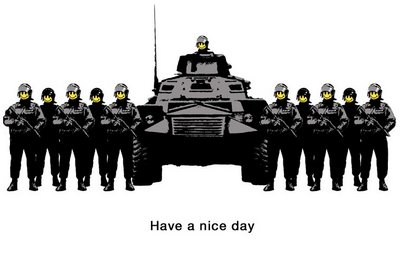 "The Harper government plans to increase the Canadian Forces presence across the country with new units in 14 cities ....Between now and 2016, the army will establish "territorial response battalions" in Victoria, Vancouver, Calgary, Edmonton, Regina, Winnipeg, Niagara-Windsor, Toronto, Ottawa, Montreal, Quebec City, Saint John, Halifax and St. John's. The units would be designed to react to domestic emergencies such as natural disasters or a terrorist attack."

A year ago January prior to the last election, we had an all-candidates meeting at the Legion. Gory details here. All the candidates were asked to answer : "What are the most important issues to this riding?" and they each took a turn at it : the environment, daycare, green collar jobs, affordable housing, the poverty gap, social justice.
Last to go was Conservative John Weston, who answered, "The 2010 Games and increasing police and military presence on the streets."

There was a momentary silence while we absorbed this, caused in no small part by the fact that his audience was living on a small island where 1) we don't have many streets and 2) when a crime is committed we mostly just call the perp's mom.
Now in fairness to John Weston, Bowen Island is just a small part of the largest riding in Canada and he was merely putting forward the generic Con agenda. An increased police and military presence on the street was always on it from the beginning. The environment, daycare, green collar jobs, affordable housing, the poverty gap, and social justice were not.

The outrage here is not the addition of troops to the streets; it's the missing programs they are replacing.

Red Tory : Soldiers with guns. In our cities. In Canada. Heh.

Thanks to Marcus for the great graphic from the brilliant Banksy.
.
Posted by Alison at 6:11 am
Email ThisBlogThis!Share to TwitterShare to FacebookShare to Pinterest
Labels: Banksy, John Weston

Weren't they heard to exclaim:

(Especially for those poor people in, say, North Vancouver)

Silly CUFD (Conservative Uniform Fetish) cropping up again. I seriously wonder if anyone has ever looked at brain/body changes in wingnuts when they're exposed to uniforms.
There's a PhD thesis in there somewhere.

Boris :
I believe Stanley Milgram took a shot at it. ;-)

Your garden variety conservative gets all gooey about anyone in uniform, but only the real fascists among them insist that putting more jackboots on the streets is an absolute good.