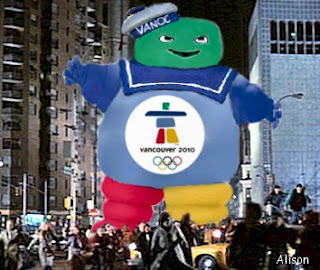 Protests today as the three year countdown to the $580 million dollar two week Five Ring Circus 2010 Games begins.
Kim Kerr of the Downtown Eastside Residents Association says the Olympics is squeezing out low-cost housing as 17 single-room-occupancy hotel buildings (SROs) in the district have been sold in the past year and several others are about to be auctioned off in preparation for the Games.
People are being thrown out of their accommodations because developers can make more money turning the SROs into expensive condos, like this.
Last September Pivot Legal Society predicted warned that the number of homeless people in Vancouver could triple by 2010 unless the government took action.
But Linda Coady, VANOC "sustainability" spinmeistress, says we've got it all wrong.
Apparently we need more private sector money first so we can set up the P3s to create the new social housing units as promised in the original bid to the International Olympic Committee.
She said it's necessary to attract private-sector money to build needed social housing, and the Olympics will help that happen.
"We've got a lot of corporate sponsors that are going to be spending a lot of money in Vancouver, and it's the profile and the spotlight," she said.
It's the profile and the spotlight. What utter crap.
See, we've been here before. A little recent history :
Prior to Expo '86, Mike Harcourt, then Mayor Mike Harcourt, had the same concerns as Kim Kerr has now, predicting an explosion in homelessness due to Expo-driven tenant evictions.
No-eviction legislation, time-limited to Expo, was proposed to Vancouver council to prevent hotel owners from evicting their tenants in order to convert their rooming houses into "boutique hotels" for Expo visitors. Some of the tenants had lived in the same place for 25 years. The average resident was white, single, elderly, male, and handicapped.
Jimmy Pattison, then President of Expo Corp, said evictions were not a problem and that the legislation would be "an unfair intervention in the marketplace".
Premier Bill Bennett said, "The removal of slum areas are the government priorities."
Minister of Municiopal Affairs Bill Ritchie said, "Despite hardship of individuals, development must take place."
Premier Gordon Campbell, then Alderman Gordon Campbell, voted against the council motion for no-eviction legislation.
Following Expo '86, Mayor Mike Harcourt estimated 2000 rooms in 80 rooming houses had been shut down.
Today Vancouver city council is again scheduled to vote on a moratorium that would prohibit the conversion or demolition of SRO units.
And Alderman Gordon Campbell is now Premier Gordon Campbell.
So don't be telling us, Linda Toady, that "the profile and the spotlight" is any different now than it was last time.
Circus clowns are still circus clowns.
More from The Tyee : Poverty Hotel Buying Binge
UPDATE : Vancouver city staff opposed the moratorium on SRO conversions today, opting instead for tripling developer conversion fees from $5000 to $15000 per unit. Rationale given was that this would prove to be a deterrent. Fucking hypocrites. They did however recommend the proposed bylaw be put to a public hearing, so that's something I guess. City clerk report - pdf
Posted by Alison at 2:57 am
Email ThisBlogThis!Share to TwitterShare to FacebookShare to Pinterest
Labels: Five Ring Circus

I recall the Expo '86 evictions, particularly because of a very bitter song that Spirit of the West recorded about the situation. Damned if I can remember the name of the piece, though...

The Profiteer - Spirit of the West

there’s a cold wind blowin’ through the old east side
it cuts with the devil’s curse
they’re turning our people into the streets, while
the landlords line their purse
with the greenback dollar of the tourist trade
there’s a fortune to be had
make way for the out-of-towners, for
the tenants it’s just too bad

this appears to be their attitude.
kick ‘em until they’re down
they’re only welfare cases and
pensioners and they’re easily pushed around
we’ve invited the world to come and stay
and celebrate the fair
i wonder if the world will understand
the homeless walkin’ there.

i’m alright jack, and how ’bout you?
i’m gonna catch this wave that’s rollin’ through
and turn a trick or two
i’m alright jack, no flies on me!
i’m within my rights, my conscience is clear
i am the profiteer

I remember...It was a comment someone made last summer here, after one of the big hotels lost a big convention because of aggressive panhandlers or somesuch. And horrid Lorne whatsisname said they had BMW's at home. And the someone suggested we all turn out as panhandlers so....

Lets all rain on Campbell's (or whomever's) party and turn out on the streets in layers of our grubbiest those two weeks in 2010. god knows I can't afford tickets if I wanted to anyway (well maybe hockey is all). And any take we pick up we hand over to the true homeless because they are really going to need it.

Can you imagine it. Hundreds and hundreds more "street people" all of a sudden downtown. Day after day. Priceless!

Damn fine idea, Georgine, and I wanted to post it right away and see how many would be interested. A sort of SantaCon without the santas.
But then I thought if Lorne Meyencourt et al found out, it would boost his claim that most homeless are just "weekend homeless", so participants might need to wear a distinguishing armband or something.
What do you think?
Send me an e and I'll see who else is interested.