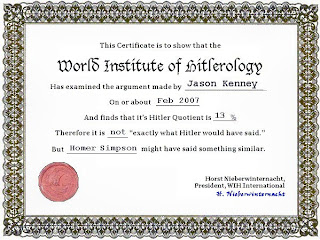 Minister of Multiculturalism Jason Kenney has failed in his second bid to win the coveted Certificate of Hitlertude this week.
Despite a valiant effort before the Congregation Beth Israel Beth Aaron in which he freely invoked Hitler, genocide, the final solution, and eliminating Israel, Mr Kenney even called Iranian President Ahmadinejad "a threat to world peace and security" but was still unable to link him with Hitler.
However, in asserting that Ahmadinejad is "hell-bent" upon “a final solution, in a perverted twist on history, that would complete the work Hitler began ”, Mr Kenney became eligible to receive this nice tub of BushLite lardass spin.
Try not to eat it all at once this time. 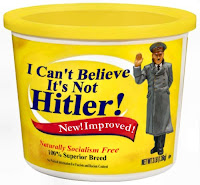 H/T : Buckdog for the link to CJNews
Posted by Alison at 11:59 pm
Email ThisBlogThis!Share to TwitterShare to FacebookShare to Pinterest
Labels: Hitlertude, Iran, Kenney

Wait a minute, I thought Saddam was Hitler. Now I'm all confused, not that that's unusual. Perhaps Mr. Kenney can clear that up in his next speech.

I like that you equate blowface Kenney with Homer Simpson - good one.

Me, I always thought Marge S. looked just a tad like Eva B.