The delicate art of sock puppetry 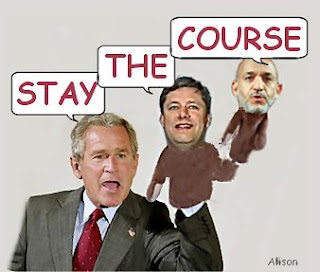 Reuters : "A speech that Afghan President Hamid Karzai delivered to Canada's Parliament a year ago, urging the country's continued military support, was nothing more than a "political stunt," written by Canadian defense ministry staff, an opposition party charged on Tuesday."
The President of Afghanistan selling the war to Parliament on behalf of the Canadian military.
Nice.
Hey Bush, your lips are moving.
"Death to Canada", outraged Afghans chant.
Yes, we are rather worried about that too.
.
Posted by Alison at 4:11 am
Email ThisBlogThis!Share to TwitterShare to FacebookShare to Pinterest
Labels: Afghanistan, Karzai, Stephen Harper is a git

oooo, nice photoshop! semmi-appalling story (what was once appalling is merely semi-appalling post 9/11)

Scout-Glad I'm not the only one whose outrage is a little tired.
I used to rant and rave by the hour, now I just mutter,"Oferfuckssakes!", and carry on as if I were normal.
Which I'm not. When the page loaded I saw "Stay the corpse."
Time to adjust my meds ;)
Well done, Alison!

What a freaky triple fornication?
Yikes!

Alison is good but I don't believe she's human. She is some form of mythic fairy wandering the Bowen woods looking for the forlorn to crash ashore the pitiless rocks of her storied Isle. And in her spare time she blogs.

While it is never prudent to look a gift-sock puppet in the mouth, I do believe that Mr. Bush's lips are actually moving because he is still trying to pronounce 'sar-KO-zee'

And no, he has not been watching 'The Usual Suspects'.

Instead, he was having a little difficulty with the names of world leaders and countries at the U.N. yesterday.

Ross : K-A-I-S-E-R S-O-Z-E !!!
Fuck politics - let's talk about movies. That's one of my favourite films.
I read somewhere that these pronounciation cue cards are pretty common - makes sense.
That this came out for Bush's speech though sounds like his retainers aren't as reliable as they once were.

Chris : Wish I'd thought of "Stay the Corpse!"

Scout : Yeah, my outrage goes up and down. Have to remind myself this age isn't special, that these things have always been, that we are deluded when we hope to think we have transcended them.

Berlynn, Skdadl, Invisible Holly : Sometimes a picture is only worth three words.