About that word "consensus" 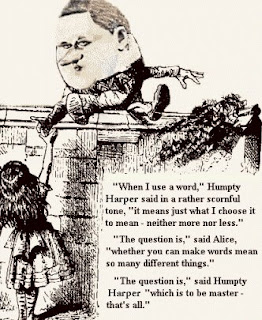 When I use a word, Humpty Harper said in a rather scornful tone, it means just what I choose it to mean.
June 22, 2007 Macleans : Harper won't extend Afghan mission without consensus among Canadians
"Prime Minister Stephen Harper says he wants a consensus among Canadians, not just parliamentarians, about the country's future role in Afghanistan."
Sept 9, 2007 G&M : Tories willing to wait for Afghan consensus
"Prime Minister Stephen Harper says he will delay a vote on extending the Afghanistan mission will until he is sure that Parliament will agree to keep Canadian troops in the war-torn country past February 2009.
“But I don't see a necessity of rushing into a vote, unless we're able to have a situation where a vote would be successful, where there would be some agreement among at least some of the opposition parties that would carry the day and would give a mandate to our armed forces,” said Mr. Harper."
Sept 9, 2007 CNews : "Harper said he's still seeking a consensus, but a government official later said that consensus has to be in line with the government's wishes.
The official said that "consensus" means 50-per-cent plus one MP in a parliamentary vote."
The question is, said Humpty Harper, which is to be master - that is all.
Posted by Alison at 9:15 am
Email ThisBlogThis!Share to TwitterShare to FacebookShare to Pinterest
Labels: Afghanistan, Harper, Steve

Well kids, just as you like your milk and cookies, our American Prime Minister lives on the souls and blood of young soldiers.
The guy's gotta eat, right?
Now sweet dreams and off to sleep with you.

-And for another night, they cry themselves to sleep...