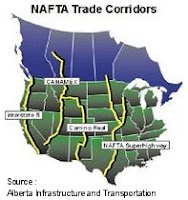 Once upon a time the NAFTA Superhighway/Trade Corridor was just a conspiracy theory.

Then it was a gleam in Manitoba Premier Gary Doer's eye. From his 2007 Speech from the Throne :

That alliance was the Ports-to-Plains Trade Corridor, a lobby group comprised of US and Canadian elected officials and business leaders, and SPP luminaries like Ron Covais, chair of the US end of the North American Competitiveness Council.

Later it showed up as a useful map on an Alberta government website - see above.

Now, according to the Government of Canada website, it's "a new job-creating investment contained in the Harper Government’s Economic Action Plan" :

"The CentrePort Canada initiative involves using the James Armstrong Richardson International Airport and surrounding land as a hub to import goods from Asia and Europe and then distributing those goods throughout North America by air, rail and road. The governments of Canada and Manitoba are jointly funding the next phase of this project, which involves building a high-speed transportation corridor.

It serves as a natural connection point between Atlantic shipping lanes and the Asia Pacific Gateway and as the northern terminus of the fast-growing mid-continent trade corridor, with the potential to expand to take advantage of trade opportunities in Canada’s North."

Sigh. They just don't make conspiracy theories like they used to.

I never understood what was so insane about stating that corporate interests would build a commercial corridor through Canada, Mexico and the USA under the SPP.

The USians who see the creation of a Mexican-dominated NAFTA, with the dollar merged with the peso etc., ... now those folks I know are crazy.

It isn't considered polite, Thwap, to note how thin the venneer of democracy covering corporate interests.
I once heard a Canadian interview the president of Mexico. The Canadian was slamming democracy as it is practised in Mexico because criticism of elected leaders is suppressed.
"That's nothing," retorted the Mexican Pres (or words to that effect), "You can't criticize corporations."

Re US rightwing reaction to SPP and deep integration : What I find odd about their reaction is that their xenophobia trumps their usually friendly attitude towards corporate "rights".

Fun fact : The case for the amero was first made to the Canadian House of Commons by Jason Kenney, Rob Anders and Rahim Jaffer in March 1999.

"They just don't make conspiracy theories like they used too"

No, "they" certainly don't. There's no need to because propaganda has become a way of life for Canadians.

However Stevie Wonder and Dipper Doer's antics haven't gone completely un-noticed (or un-blogged) in Winnipeg's neck of the prairie woods.

My thanks for the Ports to Plains link, I knew it was out there somewhere but couldn't remember what it was called.

I have to admit, I'm a fan of Obama. But that still doesn't mean I want him or his friends wandering around in 'my house' with a tape measure.

Humanity has at its very roots dark conspiracy.

Those you go out of their way to "debunk" or deride those who even slightly suggest we might not be getting the whole story from our "betters" are just too firmly invested in their own fragile "intellects".

Some wacko "conspiracies" are floated to muddy the waters and discredit all who might question any aspect of reality as presented by our rulers and their puppets.

The power of objective discernment is a hard won ability that requires constant vigilance.

Thank you for that post and your wonderfully insightful blog.

Anon : And thank you for your very generous comment.

Re "wacko conspiracies"
Some time back Chet at Vanity Press and myself were pretty agitated about this, noting that many US progressives like Christopher Hayes at The Nation and the otherwise wonderful blog Shakesville dismissed all alarms about the SPP on the grounds that Birchers and media muggers like Dodds went on about it. The ground has since shifted and all is now permitted under the guise of "fixing the economy". I didn't foresee this - I had expected a 'security' issue.

Harry : Ports-To-Plains is a wealth of info - they are so pleased with themselves. Glad to hear locals there are on this. Perhaps you might recommend who I should be reading.